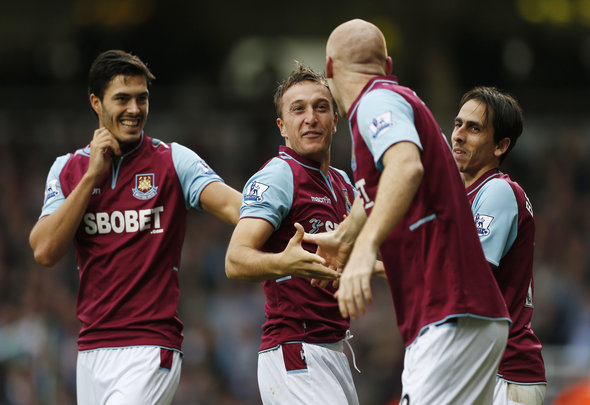 West Ham United captain Mark Noble has revealed that he considers it a ‘personal regret’ that the club sold former defender James Tomkins.

The Englishman left the Hammers for Crystal Palace in 2016 for what the BBC reported was a £10million deal. Having spent their entire career up till that point together, though, Noble still finds it a shame that the 30-year-old was allowed to leave.

“It will be nice to see my old mate James Tomkins when Crystal Palace arrive tomorrow,” he wrote in his column for the Evening Standard.

“James is coming back from a groin injury, but he’s a top player and it’s still a personal regret that we sold him. He used to live just a few houses from me, but he has moved now, so there is no chance of me sending up another drone over his place, which is what I did once, so he’s safe!”

Tomkins will surely come along with the Palace squad that travels across the capital to the London Stadium for what is shaping up to be a decent little clash at the London Stadium. Tomkins was a solid centre back for West Ham throughout his time in east London, but the club did well to get £10million for him, to be honest. He made 242 appearances for the Hammers in all competitions [Source: Transfermarkt] and performed pretty well in the majority of them. However, he was never a star player and so £10million was a very decent return for him. He’s gone on to do OK for Palace, but he’s not quite established himself as well as he did for the Irons. However, you can see why Noble regrets losing a good player and a long-time friend. The two will have spent many hours together over the years, and so it will have been a shame for him to see the Englishman depart. However, these things happen in football and Noble understands that.