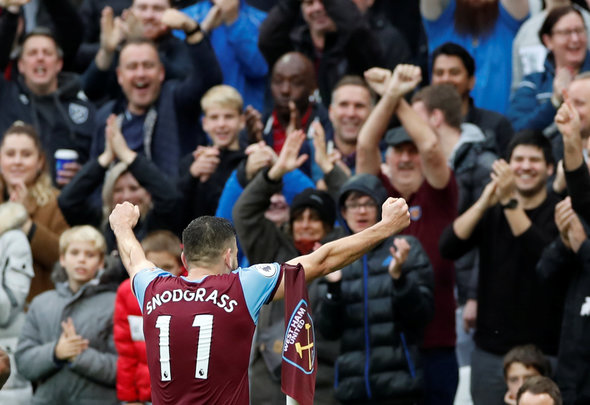 It wasn’t too long ago that he was shipped out on loan to Aston Villa, with the widespread assumption being that his time at West Ham was coming to an end.

When he returned last season, however, he fought his way back into Manuel Pellegrini’s plans, and arguably had his best season to date in east London.

Similarly, this year he has seen himself slip down the pecking order, and has had to be content with a place on the bench most weeks.

When he got his chance on Saturday though, he really grabbed it with both hands.

The £40,000-a-week ace [Spotrac] hit the Hammers’ opener in a 1-1 draw with Sheffield United, and put in an all-round impressive display.

The Scot registered two key passes, two shots on goal, and a successful dribble, as per Whoscored, as well as finding the back of the net, hitting the post, and managing a match rating of 7.55.

In short, he was a standout for the Irons, and his efforts didn’t go unnoticed by talkSPORT pundit Simon Jordan.

Speaking on the station on Monday, the former Crystal Palace chief said: “This guy’s not been given a lot of game time.

“He came on, scored a great goal, could have scored the winner.

“His overall attitude on the pitch, his desire to be back amongst the fold and not complain made me think ‘well done, you’. He exuded all the kind of characteristics you want from a footballer.”

And if you’re looking for a reason why Pellegrini keeps Snodgrass around, despite him going through some pretty patchy spells on occasion, there’s your answer.

His attitude is exemplary, and his effort simply cannot be faulted.

He may not always have the quality, and there are weeks when he is infuriating to watch, but when he gets it right, he is a game changer.

Snodgrass won’t play every game, but when he does, he will always give it his all.

What kind of manager wouldn’t want a player like that around?