Inkersole: Wilshere has failed to kick on

The 27-year-old has struggled for game time, and has failed to impress when he has been given a chance, and Inkersole is very much down on the England international.

“Pablo Fornals came into the side when Manuel Lanzini was injured but didn’t impress,” he wrote on the Football London website.

“Jack Wilshere has failed to kick on from a very good pre-season, Robert Snodgrass has seen very limited minutes so far as well.”

There’s little arguing with the fact that Wilshere hasn’t made the progress everyone at West Ham hoped he would this season. The Englishman was terrific in pre season, that’s true, but hasn’t been able to turn that into tangible progress on the pitch at the London Stadium. Perhaps he was harmed by being thrown into the fire against Manchester City in the first game of the campaign, but even in Carabao Cup action against lower league sides he’s not looked as good as you’d expect. The statistics show that Wilshere is struggling to do even what he did in an underwhelming debut season for the club last term. As per WhoScored.com, the former Arsenal man is averaging less shots, key passes and successful dribbles this time round. Meanwhile, he is being more wasteful on the ball, averaging more unsuccessful touches and being dispossessed more frequently. It’s very concerning for manager Manuel Pellegrini, that’s for sure. 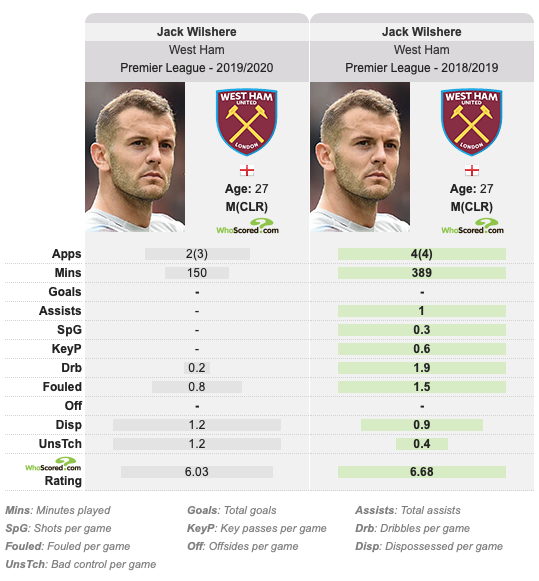