This time last season West Ham United centre back Angelo Ogbonna was being lambasted as one of the worst players in the Hammers squad, someone not fit to wear the shirt.

It’s safe to say that his resurgence this campaign has been quite something to witness. He has emphatically usurped Paraguay international Fabian Balbuena at the heart of the defence, and is now the undisputed number one choice alongside Issa Diop.

It shouldn’t be underestimated just how important the Italian international now is to Manuel Pellegrini’s side, and that’s reflected in the words of journalist Sam Inkersole on Friday.

Writing on the Football London website, Inkersole said: “Ogbonna has ousted Fabian Balbuena – who Pellegrini admitted shouldn’t have played against Man City on opening weekend – and has kept his place with some excellent displays.”

He has been excellent, there’s no doubt about that. At times the 31-year-old has appeared more poised than the much-hyped Diop. Plus, Ogbonna being a left footer creates balance alongside Diop which simply isn’t there when Balbuena partners the Frenchman.

The statistics tell us all we need to know about the rejuvenation that Ogbonna has given his Irons career this campaign. He has excelled in a way that he simply didn’t last time out.

As per WhoScored.com, the veteran centre half is currently exceeding his average tackles, clearances and blocks per game from last season, while he is being dribbled past less often, as well. Meanwhile, his average WhoScored rating per game is up from 6.78 to 6.90.

Inkersole is spot on to praise Ogbonna for the way he’s turned things around so far this term. The Italian has been nothing short of spectacular. 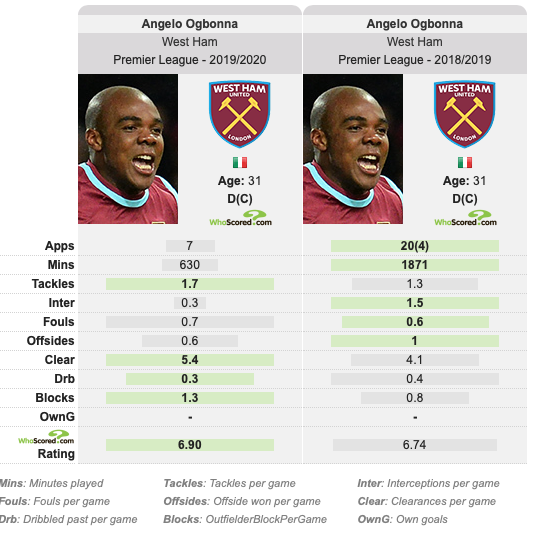