Inkersole: Pellegrini may be playing a game with Cresswell & Masuaku

West Ham United manager Manuel Pellegrini may be ‘playing a bit of a game’ with his two left backs, according to journalist Sam Inkersole.

The club announced on its official website on Wednesday night that Aaron Cresswell had signed a new long-term contract, meaning that both he and Arthur Masuaku are tied down for the foreseeable future.

Inkersole, however, believes there may be more to it than meets the eye: “There is a school of thought too that Pellegrini is playing a bit of a game,” he wrote on the Football London website on Thursday.

“Having the two signed up to contracts means they can’t leave for nothing, retain some market value and the club can still get a fee for them. Cresswell was of interest to Everton earlier this summer while Masuaku has previously been linked with a move to Roma.”

It’s smart business to have players tied down to long-term deals, because it means that if Pellegrini decides to sell them the club can ensure they get a decent fee for them. It’s unlikely that either Cresswell or Masuaku will be sold in the short term, what with the two of them competing for the starting left back spot at the moment. However, Cresswell’s new contract on Wednesday may have had just as much to do with keeping his value high as it did his excellent recent form. Perhaps, then, Inkersole is right. Pellegrini may well be playing a bit of a money game with the Hammers duo. That’s no bad thing, though. The difficult thing is picking who to sell if Pellegrini opts to do so. When you look at the statistics from this season, it’s actually Masuaku, not man of the moment Cresswell, who has the edge. As per WhoScored.com, the 25-year-old is averaging more tackles, interceptions and clearances per game. Meanwhile, he’s got the advantage in blocks, drawing offsides and being dribbled past less often. So we’ll just have to wait and see how this one plays out. 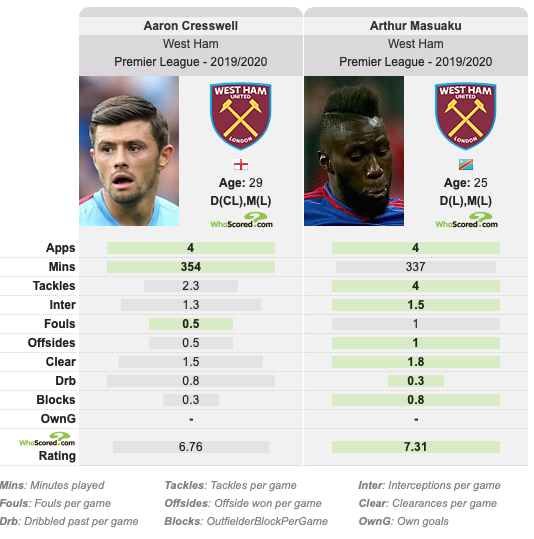