The iconic Hammer turned 71 on Wednesday, and Gold was quick to share his best wishes with the former England international. 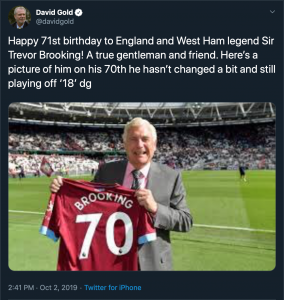 It will be a long, long time before West Ham see a player as iconic as Sir Trevor. The former midfielder was a proper Hammer, loyal to the club beyond belief, and so fondly remembered that he has been honoured with his own stand at both the Bolyen Ground and the London Stadium. Certainly, given his contributions to the Hammers over the years, whether it be as a player, a manager, or an ambassador for the club, he deserves all the adulation he is given, and it’s nice to see the current owners recognising another milestone for the legendary Iron. Gold’s tweet reflects the core values of West Ham as a club, a team that is keen to preserve its past, and to acknowledge and honour those that have helped it to become one of the most historic and well-loved in England. Brooking will have played a huge part in establishing that love for an awful lot of people.