The club announced on its official website on Friday that the prolific 17-year-old had joined the club, and Gold was quick to bring him into the fold.

“We are delighted to announce the signing of highly-rated young striker Ademipo ‘Mipo’ Odubeko,” he wrote on his personal Twitter account.

“The powerful centre forward, who turned 17 on Monday, was born and raised in the Republic of Ireland, for whom he has been capped at U17 international level. Welcome Ademipo. dg.” 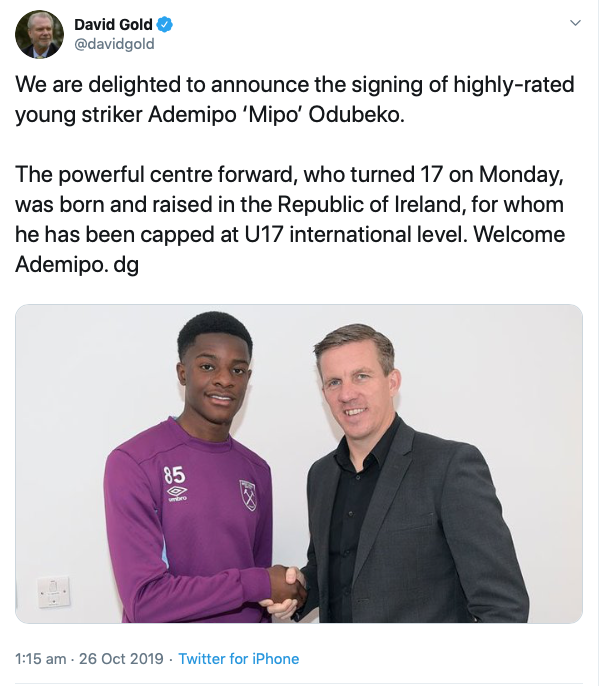 This is pretty typical of Gold, who seems to enjoy being the designated spokesperson for West Ham. He is the one who is active on Twitter, engaging with fans and providing his own views and opinion on what’s going on at the club and in life in general. This sort of transparency is welcome, because it’s not something that is evident in too many other owners, certainly not at Premier League level. It’s clear that everyone at the club is delighted to have Odubeko there. Managing to bring in a highly-rated young talent ahead of numerous other teams is a fantastic feather in the Hammers’ cap. Gold is obviously excited to have him on board, clearly viewing him as a top young striker who can develop into something special at the London Stadium. Whether he actually ends up doing that or not remains to be seen, but it certainly sounds as if the West Ham brass think he has a bright future.