Cresswell could stay beyond 2021 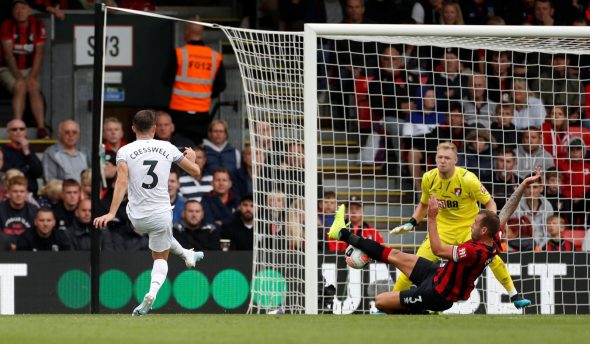 West Ham United’s in-form left back Aaron Cresswell could now be set to stay at the club beyond his current contract’s expiration, according to Claret & Hugh.

The reliable Hammers news source claims that the England international’s upturn in form is likely to see him stay beyond 2021 when his deal expires.

The 29-year-old had been out of form for a long period of time before coming in for the suspended Arthur Masuaku against Manchester United.

However, back-to-back strikes against the Red Devils and Bournemouth last time out has reversed his standing amongst the Irons faithful, and he could now be set for a long stay at the London Stadium.

Cresswell’s turnaround in recent weeks has been absolutely phenomenal to witness. The former Ipswich Town man was seemingly headed for an eventual exit from the club due to his poor form which had lasted for over a year heading into this season. However, he has completely reversed that over the past couple of weeks. First, he put in an excellent performance against United, capped by a stunning free-kick goal past David De Gea. Then he followed it up with another fine strike in the 2-2 draw with the Cherries last time out. The statistics show you what a big turnaround this has been. As per WhoScored.com, the Englishman’s WhoScored rating has skyrocketed up from 5.29 in the season’s opening-day humiliation against Manchester City to 7.93 and 7.18 against United and Bournemouth. He is now averaging two tackles and one interception per game, while his shots per game tally is standing at 1.7. His passing accuracy (76.6%) could still be improved, but he’s certainly got a lot better recently. With that said, it would be no surprise to see him stay beyond 2021.