The 20-year-old burst into action for the Under-23s against their Stoke City counterparts, catching the goalkeeper off his line and chipping a delightful long range effort into the net.

With the young Irons easing to a 4-0 victory, Collison was particularly blown away by the 20-year-old.

“Stunning Powelly #COYI,” he wrote on his personal Twitter account in reply to a video of the strike. 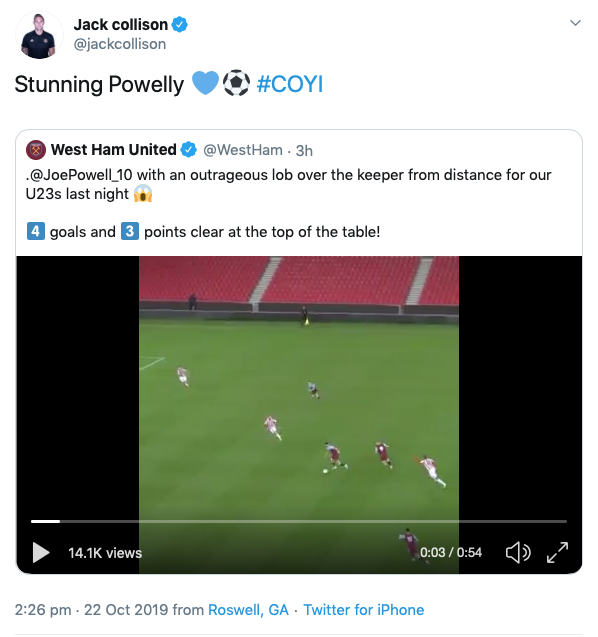 There’s no doubt that this was a sumptuous effort from young Powell. The midfielder picked the ball up about 35-40 yards out from goal, turned, and proceeded to lift a perfect chip over the head of the ‘keeper and into the back of the net. It was a lovely piece of vision, audacity and execution from the youngster, who appears to be rounding into a talented player in this terrific-looking Under-23s team. To receive praise from a midfielder of the quality of Collison will have meant a lot to Powell, with the two obviously having worked together when Collison was involved in the Hammers’ academy prior to his switch to Atlanta United last summer. The task for Powell now, at 20 years of age, is to either secure a loan move away to improve his game, or to perform to such a high standard with the Under-23s that manager Manuel Pellegrini has to consider him for the senior side. Either way, he’s doing himself plenty of favours at the moment.