Cascarino: Anderson has been big disappointment for West Ham

The Hammers haven’t won a game since the back end of September, and Cascarino believes their imperious Brazilian hasn’t built on a terrific debut campaign last time out.

“The disappointing one for me, particularly in the forward areas, has been Felipe Anderson this year,” he said on talkSPORT [26/10; 07:42]. “Because what a good player he looked last year.

“This year, hasn’t really got going. [Andriy] Yarmolenko will always come in on his left foot. I think [Manuel] Lanzini’s had his moments, but he had a long-term injury so they need more from him. They’re a bit of an enigma team.”

There’s no doubt that the biggest issue West Ham have had this season has been a lack of production from their attacking midfielders. Yarmolenko has been tremendous, but Anderson, Lanzini and Pablo Fornals have all been immensely disappointing thus far. We went into the campaign expecting this to be the strongest area of the pitch for Manuel Pellegrini’s side, but club record signing Sebastien Haller has largely had to feed off scraps up front. Curiously, though, the statistics paint a rather uneven picture when it comes to how Anderson has performed this season in comparison to the last one. As per WhoScored.com, the 26-year-old is averaging more shots and dribbles this term, while he is being caught offside less and having fewer unsuccessful touches. On the flip side, though, he is producing fewer key passes and is being dispossessed more frequently. The big difference is in front of goal, where he scored nine times and grabbed four assists last time out. He’s yet to find the back of the net this season, although he has got three assists. 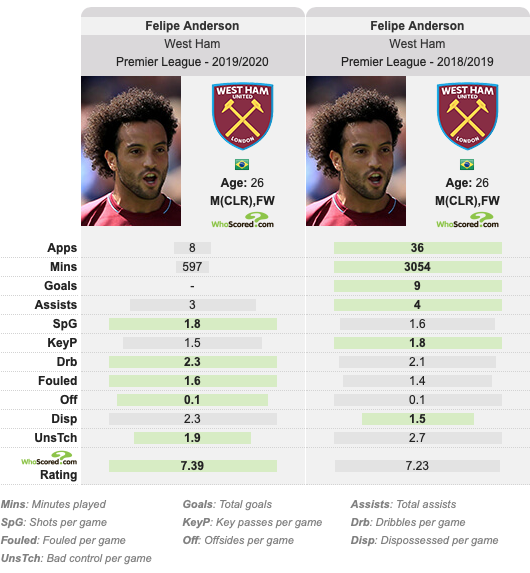