Antonio update is a god-send for West Ham

Make no mistake about it, West Ham United have missed versatile winger Michail Antonio dreadfully since he went down injured against Newport County in August.

The 29-year-old has been out of action ever since, and manager Manuel Pellegrini has had to muddle on without one of his most useful players. However, there has been some good news surfacing about the 29-year-old recently.

Reliable Hammers news source Claret & Hugh claims the former Nottingham Forest man has set up his own schedule for his recovery and is expected to be back in action by next month, having originally been ruled out until December.

That’s truly tremendous news, and will likely have the West Ham supporters jumping for joy. This ahead-of-schedule recovery would be a bit boost to Pellegrini’s side moving into the busy festive period.

It’s unfair to compare what Antonio has done in his handful of games this season to what his fellow Irons attacking midfielders have produced. So to get a better understanding of his value, we need to look at what he did last time out.

As per WhoScored.com, the Englishman grabbed the most goals and assists – not surprisingly at this stage – than fellow Hammers stars Felipe Anderson, Manuel Lanzini and Andriy Yarmolenko have so far this campaign.

He was also fouled the joint most, while completing 1.8 dribbles per game. However, his true value lies in his versatility. WhoScored lists the positions he can play as right back, central midfield, right midfield, left midfield and up front. There’s no one in this West Ham side who can do as many jobs as he can.

With that said, and as we are approaching the busiest time of the season, Antonio’s return could prove to be a god-send for the improving Hammers. 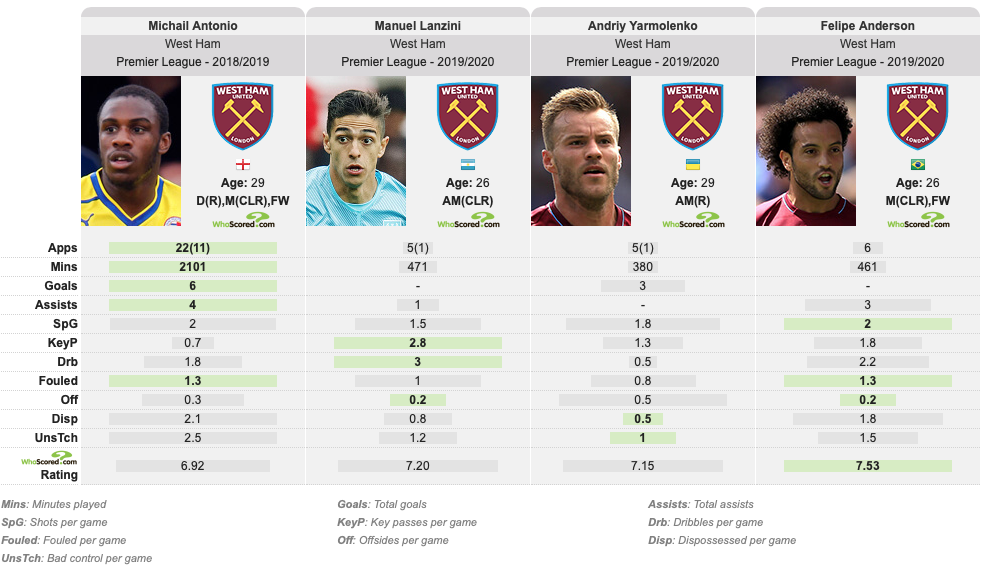