So while the likes of Angelo Ogbonna, Andriy Yarmolenko and Sebastien Haller have been terrific, playmaker Felipe Anderson has very much underwhelmed in his second season in English football.

With that said, it’s slightly surprising that he made it into journalist Sam Inkersole’s predicted line up for the Hammers clash with Everton on Saturday, posted on the Football London website.

The Brazil international is a little bit lucky to make that eleven given his lack of production this campaign. He’s not been bad, his overall displays have been fine, but he’s been nowhere near as dynamic as he was last term.

The statistics demonstrate that, and they make for interesting reading. A comparison between what he achieved last season and in this one provides fascinating insight.

As per WhoScored.com, the 26-year-old is actually averaging a higher WhoScored raring per game this time round, clocking in at 7.53 against 7.23 last campaign.

However, it’s going to take a monster effort for him to now match or exceed the nine goals he scored in the Premier League last time out, as he’s failed to net as of yet. Meanwhile, he’s currently lagging behind in a number of offensive statistical categories.

The former Lazio man is averaging fewer key passes, while he is being dispossessed much more often this season, up from 1.5 to 2.1. That’s huge, and may be down to a lack of confidence and poor decision making.

With this downturn in form, and certainly in goals, Anderson is perhaps fortunate that Michail Antonio is injured and Pablo Fornals hasn’t made a quick adaptation to English football. Otherwise, he could have been warming the bench on Saturday. We need the 18/19 season version of Anderson back. 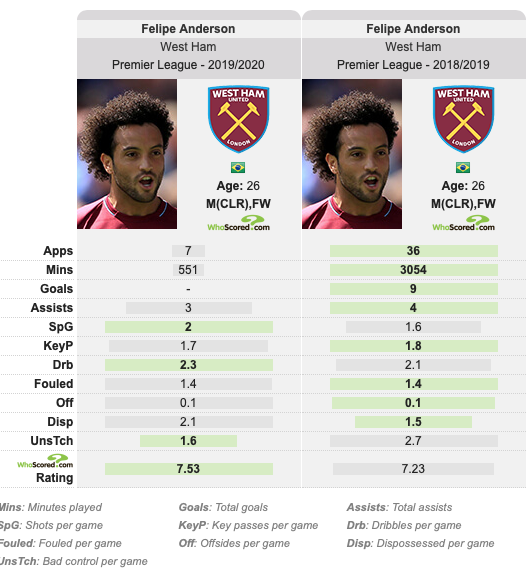