Sinclair clearly a fan of Yarmolenko

Trevor Sinclair suggested an alternative chant for West Ham attacker Andriy Yarmolenko after the Hammers’ official Twitter account highlighted a chant that was heard on Saturday.

During the Hammers 2-2 draw with Bournemouth, a section of Hammers fans could be heard doing their own version of the famous Yaya Toure/Kolo Toure chant using Issa Diop and Yarmolenko instead.

The Hammers’ verified Twitter account tweeted the Yarmolenko-Diop chant on Sunday evening and Sinclair replied with his own chant for Yarmolenko that highlighted the 29-year-old’s ability to cut inside and score a goal.

“Yarmolenkoooo Yarmolenkoooo cuts inside, pulls the trigger & bangs a goal,” wrote the former Hammer on his verified Twitter account. 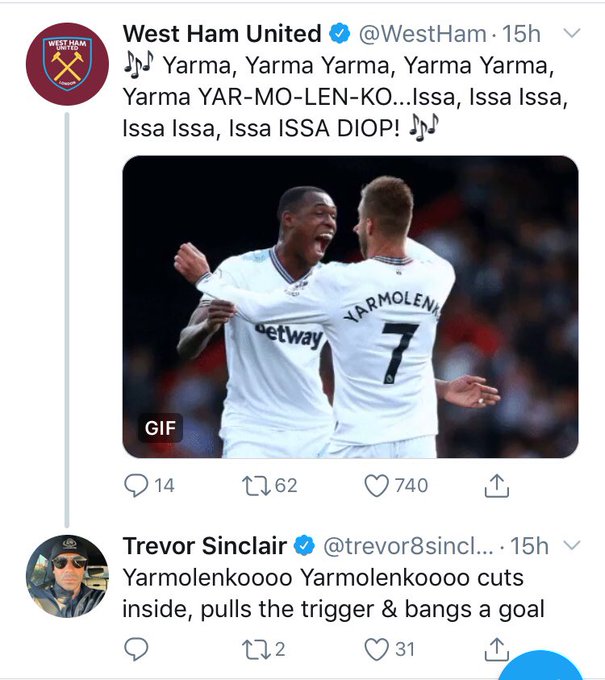 While there may be different chants for Yarmolenko cropping up all over the shop, one thing that everyone can agree on is that the winger definitely deserves to have his name sung by the West Ham faithful following his start to the season. The Hammers winger has been an attacking asset for Manuel Pellegrini so far as he has looked lively by averaging 1.8 shots per game and more importantly he has made his efforts on goal count by racking up three goals in six league appearances (Source: WhoScored). While sometimes Yarmolenko has looked a little off-the-pace in certain matches so far, see how he managed only 30 touches in the 0-0 draw with Aston Villa for more information (Source: WhoScored), that’s understandable considering his injury-hit 2018/19 campaign. The winger spent 252 days stuck on the sidelines due to a knee injury, as per Transfermarkt, so clearly is going to take some time to shake off the rust. However, what is impressive, is that Yarmolenko is able to be clinical when the right opportunity falls his way.