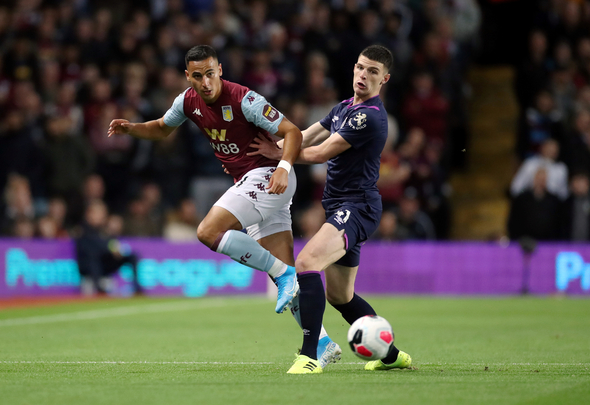 The Sky Sports pundit shared that while he is sceptical of players who move from centre-back into midfield, he believes Rice has done brilliantly for West Ham so far.

Neville added that he thought Rice was ahead of expectations but did point out that he has a little bit of a way to go in order to transform from being a good holding midfielder in the Premier League to being one of the best in the division.

“As at the moment, I think he is a really good Premier League holding midfield player, he has done brilliantly for West Ham.

“He’s hugely ahead of where he should be in terms of expectations, he’s obviously a really good type in terms of his character, attitude and work ethic.

“It’s that… is he a good central midfielder in the Premier League? He plays along Mark Noble who has had a great career in Premier League football, 10-12 years and been a great performer, and then you got those players he (Rice) has just mentioned there, Busquets is one of the greatest players of all time, he mentioned Fernadinho, Rodri, I’m sure he’s looking at Fabinho at Liverpool, Matic in his heyday at Chelsea…

“And to get up to that level, he has a little bit of a jump to make, and I think it’s difficult.”

Neville is fair with his assessment of Rice. The pundit clearly doesn’t want to go overboard with his praise of the 20-year-old just yet by claiming that he is one of the best midfield enforcers around, but he did make sure to acknowledged that Rice has done well to establish himself in the Premier League. The 20-year-old has played 66 times in the Premier League, as per Transfermarkt, and 45 of his outings have seen him deployed as a midfield enforcer (Source: Transfmarket), given that it’s rare to see a player of his age have so much experience under his belt, it shows he is on the right path to becoming a superstar of the game. However, Rice’s game still has room for improvement, he made a notable mistake while representing England recently, and he does require patience. Hopefully, Rice is able to continue defying expectations and given that he is contracted to the Hammers until 2024, you hope he fulfils his potential at the London club rather than move on in order to see another club experience his best years.