Carlton Cole took to Instagram to effectively put an arm around West Ham youngster Nathan Holland by sending him a supportive message after the winger shared he was devastated about losing 4-0 to Oxford United.

The 21-year-old winger made his second appearance for the Hammers’ first-team, his first and last outing came in 2017, and it’s safe to say he was no doubt hoping for better.

The Hammers crashed to an embarrassing defeat, considering they were playing League One opposition, and Karl Robinson’s side could have easily scored more considering they carved out enough space to have 17 shots on goal. (Source: WhoScored)

Yet just because West Ham were swept aside, it doesn’t mean Holland let himself or his team down.

The 21-year-old looked lively in the 56th minutes he got to play on Wednesday as not only did he have two shots on goal, one hit the target, but he also made two key passes. (Source: WhoScored)

No other Hammers player made more than two key passes and considering that the 21-year-old only touched the ball 36 times, he did all he could with how little of the ball he saw.

Holland also completed one dribble, which is actually impressive considering only Jack Wilshere managed more, and the only thing that let him down was his decision making at times.

However, considering he isn’t experienced that can surely be excused.

You also have to believe that senior players such as Wilshere or Robert Snodgrass had played as well as their ability on paper implies they should have, Holland would have had an easier time proving how good he was.

Yet the 21-year-old seemed to be hard on himself on Instagram as he simply said he was grateful for the opportunity but devastated.

“Devastated about the result last night but very grateful for the opportunity,” wrote Holland via his personal Instagram account.

When you consider how fragile a young player’s confidence is,  Cole was spot-on to quickly pop up in Holland’s comments to make clear that the winger was one of his side’s better players on Wednesday and that it was onwards and upwards for the 21-year-old.

“Personally I thought You was one of our better players. Don’t be disheartened bro. On wards and upwards for you,” wrote Cole via his verified Instagram account. 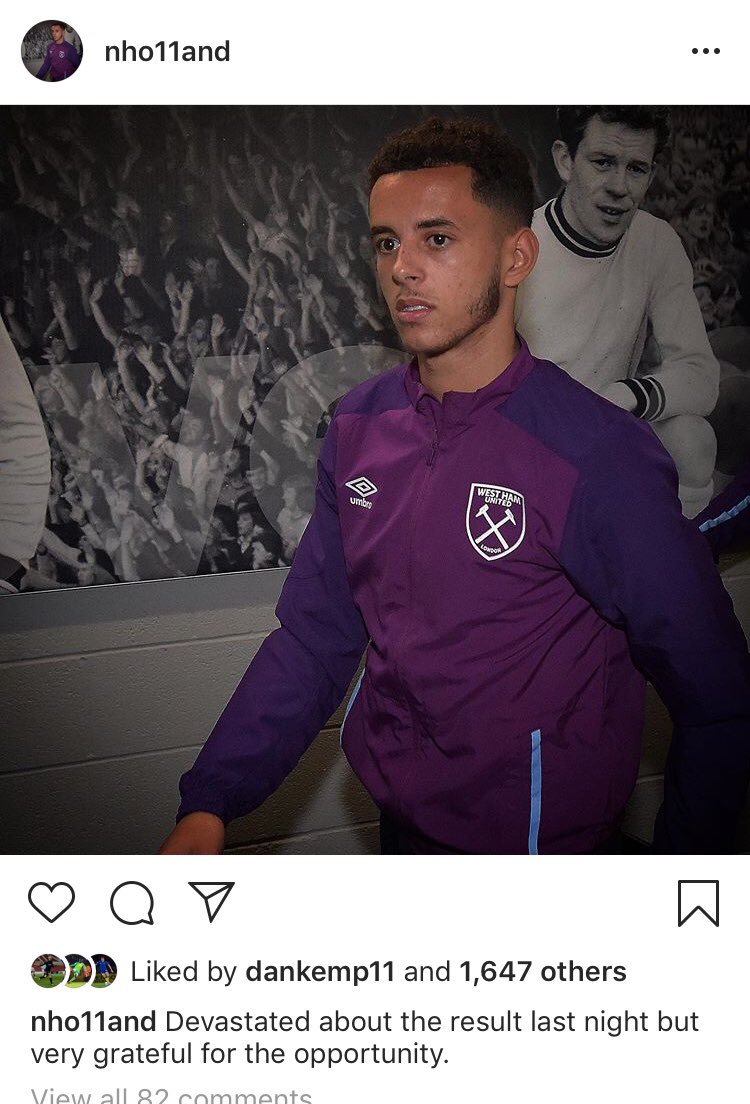 Hopefully, Holland takes Cole’s words to heart as you feel Holland shouldn’t be the one who is beating himself up over the Hammers’ 4-0 loss.