The 22-year-old was forced into emergency bowel obstruction surgery in the summer and was reported by ExWHUemployee to be out until late October.

Despite this, Silva posted a picture on his personal Instagram account story on Thursday of him with his boots on, accompanied by the simple message “soon back.” 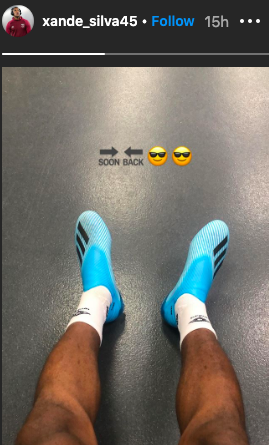 After the deadline day exit of Javier Hernandez to Sevilla, the young Portuguese forward was included in Manuel Pellegrini’s 23-man squad for the Premier League season and could be set for a more advanced role after the injury to Michail Antonio [Football Insider].

Pellegrini will surely be delighted with the progress that Silva appears to be making. The young forward will be raring to go once fully fit, with the inclusion in the Premier League squad set to be a big motivation for the 22-year-old to return from injury. After impressing in the under-23s last season where he scored seven and assisted one in his nine appearances, everything seems to have aligned for the starlet. The unexpected injury to Antonio and the departure of Hernandez is exactly the opportunity Silva needed, and he could make his return as early as the Carabao Cup third-round tie against Oxford United [The Athletic]. The picture on his Instagram could reveal his early return to some sort of training, and the fact that the young forward is wearing his boots could mean he is back on the pitch playing with a ball, rather than just running. Should that be the case, his return could easily be earlier than the suggested late October date, and Hammers’ fans could expect to see the 22-year-old relatively soon.