Xande Silva out till late October

West Ham United attacker Xande Silva is likely to be out of action until the end of October, according to ExWHUemployee.

The reliable club source revealed the news on their personal Twitter account on Sunday, claiming we won’t see the 22-year-old for another almost two months.

The Portuguese youngster had emergency bowel obstruction surgery in the summer, and it seems as if he is still some way away from making a first team comeback. 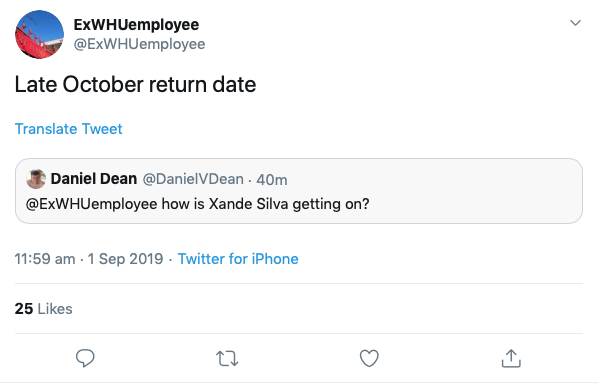 It’s no surprise that it’s taking Silva some time to get back in the first team fold. He had quite the ordeal over the summer, and it’s not something that you recover from quickly. Clearly the diagnosis from within the club isn’t particularly optimistic in regards to a quick return to first team action. To be fair, he’s not particularly needed at the moment. Club record signing Sebastien Haller is performing incredibly well at the head of the Hammers attack, while Albian Ajeti and Javier Hernandez (for now) are in place behind him. So manager Manuel Pellegrini has options at the sharp end of the pitch at the moment, meaning that Silva likely wouldn’t be featuring very much for the senior side even if he was fit. However, this is a young man with huge promise who hasn’t been able to stay fit for a sustained period of time in his Irons tenure thus far. There’s certainly concerns over his health and fitness, but hopefully he will be able to come back from this in October and stay fit for the rest of the season.