Wilshere needs to kick on after international break

The start of this season has once again been a frustrating one for West Ham United midfielder Jack Wilshere, as his  lack of game time has seen him stuck in limbo once again.

There’s no doubt that, at this moment in time, he is stuck behind both Declan Rice and Mark Noble in the central midfield pecking order, while both Robert Snodgrass and Carlos Sanchez seem to be getting more football than him recently, as well.

His plight was one detailed by Hammers correspondent Sam Inkersole in a piece for Football London on Wednesday. There, he outlined that squad strength is the reason the England international has missed the match day squad for the team’s last two Premier League games.

In between those, of course, the former Arsenal man got on the scoresheet in a Carabao Cup victory over Newport County. However, that wasn’t enough for him to get back in manager Manuel Pellegrini’s good graces for the Norwich City game last time out.

It’s now clear that the 27-year-old, on a reported £100,000-per-week [Source: Spotrac], really needs to kick on after the international break of face another season warming the London Stadium bench.

The poor form he has displayed in the league thus far this term won’t help him, and when you compare his performances this term compared to those last season, it’s evident that there is significant room for improvement.

It’s a small sample size this time round, of course, but that’s all we have to go on at this moment in time. The fact that that is the case is in and of itself a damning indictment of Wilshere’s play.

As per WhoScored.com, the Englishman is down on his play from the last campaign in plenty of major statistical categories. He is attempting far fewer passes per game, yet his pass success rate is down as well. He’s also going for fewer long balls forward, while his average WhoScored.rating per outing is way down from last season.

All of this tells us that something needs to dramatically change for him to be successful. He will likely get opportunities over the festive period due to Mark Noble’s age, and what he does with them will be key. 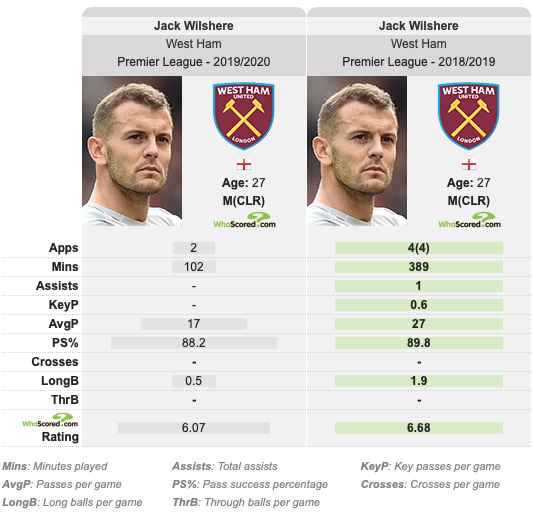