Wilshere must make most of potential big break v United

It was much the same story for him in his debut campaign at the London Stadium. However, he is now fit again and ready to make an impact for Manuel Pellegrini’s side.

He could get his chance to really get going once again on Sunday, as journalist Sam Inkersole pencilled the 27-year-old in on the Football London website for a starting spot for the Hammers against Manchester United.

That would be a big deal for the England international, and could be exactly what he needs to light the touch paper and reignite his ailing career at the top level.

He’s had a couple of chances this campaign, notably when he scored against League Two Newport County in the Carabao Cup last month, but so far he has struggled to convince Pellegrini that he is worthy of a regular starting spot.

However, with Inkersole not expecting playmaker Manuel Lanzini to pass a late fitness check for the London Stadium clash, he believes Wilshere will be the man to replace the Argentine in the starting eleven.

We know that Wilshere can produce the goods when’s at his best. When you examine the statistics from his finest season with former club Arsenal (2013/14) and compare it to what he’s done thus far as a Hammer, it shows you how much more he can do.

As per WhoScored.com, in 2013/14 Wilshere averaged more shots and key passes per game, and was fouled more often than at any time in his West Ham tenure.

However, there is reason to think he can still get back to his old level. He equaled his average dribbles per game 0f 1.9 with the Irons last time out, while he was better in possession, being dispossessed less and having fewer unsuccessful touches than in his Arsenal pomp.

So he could yet return to his former status as one of the Premier League’s finest central midfielders. Sunday’s game could be a big chance for him to do that, and potentially represents the start of his journey back to the top. 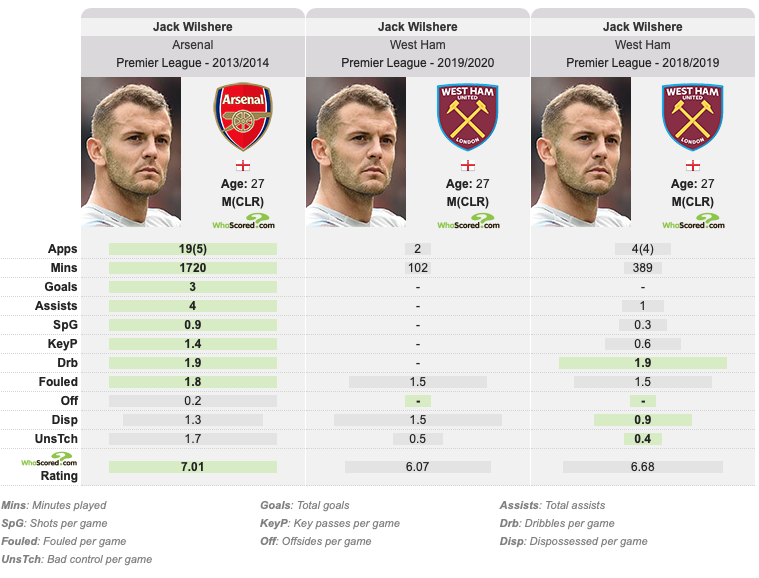