The Italian outlet’s editorial staff claim that the east London outfit are ready to make a move for the Croatian come the winter transfer window.

The Serie A champions are hoping to generate £8.8million for the 33-year-old, who has already rejected a lucrative move to Qatar.

The Hammers’ Premier League rivals Manchester United are also said to be in the hunt for a player who has scored 188 career goals in 476 games [Source: Transfermarkt].

This seems like a bizarre potential move from a West Ham perspective given that Mandzukic is undoubtedly in the back end of his career but would still likely command huge wages. He’ll be on a hefty amount of money in Turin, and make no mistake. The issue with this is that Tutto Juve’s report states that the Irons would be able to offer Mandzukic regular first team football. But would they? When you compare what he did last season (because he hasn’t played this term) to what Hammers’ number one frontman Sebastien Haller managed at Eintracht Frankfurt, it very much suggests that the Frenchman is the superior player at this moment in time. As per WhoScored.com, Haller scored more goals, grabbed more assists, and produced more shots, key passes and dribbles per game, while being fouled more often as well. The only major offensive statistical categories where the Juventus man came out on top is in his usage of the ball, being dispossessed less and having fewer unsuccessful touches per outing, while he was caught offside less often as well. With that said, it’s difficult to see how Mandzukic would command a regular first team place at West Ham these days. 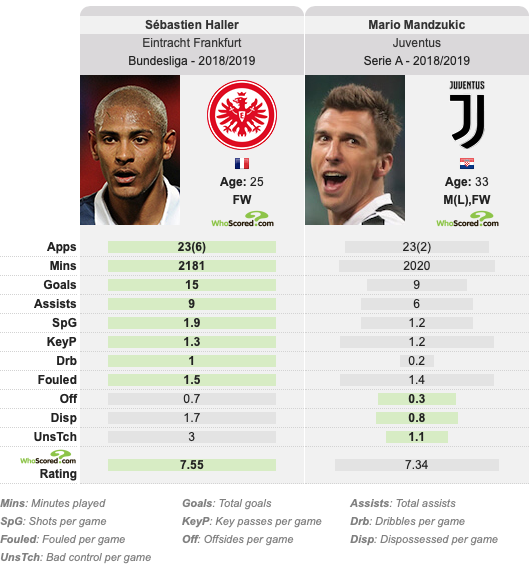