Is there anything more typically West Ham than beating the 20-time Premier League champions in a dominant display on a Sunday afternoon, only to receive a humiliating thrashing at the hands of a League One side three days later? Potentially not, and the Hammers’ 4-0 schooling from Oxford United on Wednesday was a sore beating to take. Not only did it dump Manuel Pellegrini’s side out of a competition that they will have had high hopes for this term, but the Chilean’s starting line up was a relatively strong one too. Many Premier League regulars were rested, of course, but he still included the likes of Jack Wilshere and Issa Diop in a team that should, on paper, have strolled through this one. One player who offered decidedly less experience, however, was Nathan Holland. The young winger was making his first start for the Irons, and he could hardly have chosen a worse evening to do so. The Evening Standard suggested that the starlet struggled to make any real impact on his full debut, but also pointed out that it would be harsh to judge him too critically given the shambolic display of his colleagues. Similarly, Football.London praised his outing as “lively” but did comment on some poor decision-making. For many West Ham fans, however, he was the pick of a bad bunch, and their hope will be that this anomalous horror show doesn’t tarnish the youngster’s reputation before he properly gets going in the senior game. 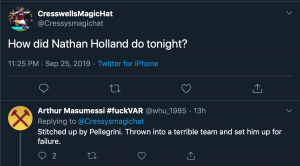