What more does Nathan Holland have to do force his way into the West Ham senior side? The winger has been knocking on the door for quite some time now, and has consistently been the standout performer for the Hammers’ reserve side. And he proved his worth again on Wednesday evening when he scored the only goal of the U23s’ 1-0 win over Valencia B. This was yet another fine finish from the youngster, who managed to sneak his way goal side of the Spaniards’ defence to slot him with poise and composure. His form is electric, and we are quickly approaching a point when a first team debut feels like a necessity. The fact that Manuel Pellegrini didn’t send him out on loan probably suggests that the Chilean does see him as part of his plans this season, but how much longer can Holland continue to be the star turn in the youth side before he grows fed up and demands more? At 21 years old he is still a starlet, but there are several of his peers who have progressed onto regular Premier League appearances, and on the basis of yet another starring role, Holland looks ready for that step up too. 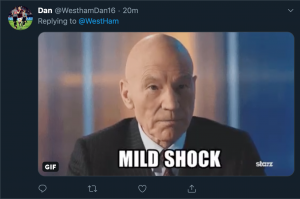