The Hammers travel to the Kassam Stadium looking to continue their stay in the competition, but Pellegrini will see the game as a chance to rotate as much as anything else.

With that said, he should ring the changes on Wednesday night, with only Angelo Ogbonna and Pablo Fornals candidates to keep their places from Sunday’s victory over Manchester United.

Despite so many alterations, this is still a West Ham eleven brimming with quality and should be enough for them to destroy their League One opposition.

Lukasz Fabianski is a world class goalkeeper, but you want him to continue to be one. That means giving him a rest every now and then. With that said, summer recruit Roberto should get the nod between the sticks.

Ryan Fredericks picked up a knock on Sunday, and so veteran right back Pablo Zabaleta must come in here. Meanwhile, teenager Ben Johnson is deserving of a start at left back.

At the heart of the defence, Angelo Ogbonna will likely keep his place with Winston Reid still not fit to play. However, Fabian Balbuena can expect to come in for Issa Diop alongside him.

In central midfield, two men much in need of game time should start this one. Carlos Sanchez and Jack Wilshere have both been patient this season and deserve to play from the beginning on Wednesday.

Just ahead of them, summer signing Pablo Fornals must keep his place as he continues to adapt to English football. Alongside him in attacking midfield should be old reliable Robert Snodgrass and young starlet Nathan Holland. Anyone who has witnessed Holland’s sparkling displays for the Irons’ Under-23s this term will view this as a long-awaited start for the 21-year-old.

And up front Albian Ajeti should come in for first choice frontman Sebastien Haller, as he did against Newport County in the last round. 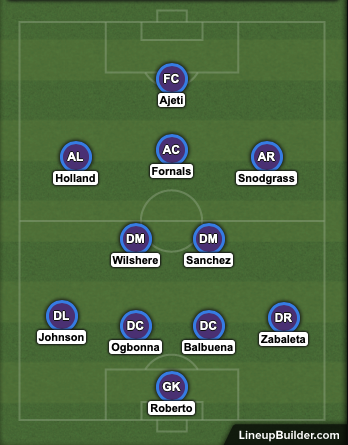