The England international hasn’t played in the Premier League since the second game of the season against Brighton & Hove Albion. However, with Manuel Pellegrini confirming at his pre match press conference on Friday [Source: Football London] that playmaker Manuel Lanzini is carrying an injury problem, the time is right to bring Wilshere back into the fray.

Meanwhile, left back Arthur Masuaku, who has been in tremendous form this campaign, is suspended having been sent off against Aston Villa on Monday.

With that said, teenage full back Ben Johnson should come in for him. Aaron Cresswell is out of form and past his best; this is the chance to see what the highly-rated 19-year-old can do. With those two changes, this Hammers side has the chance to ease past the visitors at the London Stadium.

In goal, Lukasz Fabianski is the obvious candidate. The Pole has been terrific once again in the early goings this term, and there’s next to no chance that Roberto comes in for him on Sunday.

While the left back position is up in the air, the reverse is true on the opposite flank. Ryan Fredericks is absolutely assured in his position as starter and will surely get the nod once again. As mentioned earlier, it should be Johnson who replaces Masuaku.

The central defensive positions seem pretty set these days, and rightfully so. Issa Diop and Angelo Ogbonna have been excellent in recent weeks and deserve to keep their places here.

In the middle of the park, Declan Rice’s defensive ability and Mark Noble’s tireless attitude will be key against Ole Gunnar Solskjaer’s side. Both men need to start on Sunday.

With Lanzini potentially missing out, most people would expect summer signing Pablo Fornals to come in for him. Why Wilshere, then? Well, the 27-year-old has box-to-box ability and can contribute both defensively and offensively, something which will be key against United.

On the flanks, Andriy Yarmolenko and Felipe Anderson deserve to continue their fine starts to the season. Just ahead of them? Well, that should be Sebastien Haller, of course. 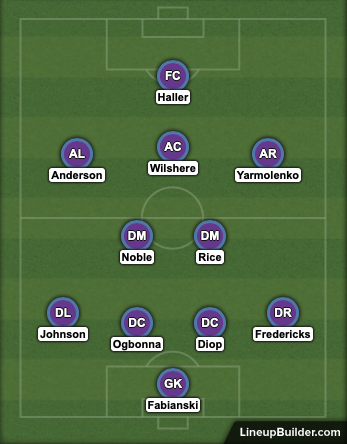