West Ham United manager Manuel Pellegrini would be wise to ring the changes after Wednesday’s 4-0 humiliation at League One Oxford United in the Carabao Cup.

That means that only three players should stay in for Saturday’s trip to the Vitality Stadium to take on Bournemouth, with eight players facing the axe.

England international Jack Wilshere is one man who should keep his place, despite his struggles at the Kassam Stadium. The former Arsenal man needs a run of games to get back to top form, and with Manuel Lanzini injured and Pablo Fornals out of form, he must keep his place.

Centre back Issa Diop and left back Arthur Masuaku are the only other men who should retain their spots in the starting eleven, with this alternative eleven having enough on paper to outdo the Cherries.

There’s no question that first choice goalkeeper Lukasz Fabianski must come back in between the sticks. Even if Roberto had played well against Oxford, Fabianski would still be in line to return, but the Spaniard’s sub-par display means his comeback is essential.

Claret & Hugh reported recently that right back Ryan Fredericks should be fit for this game after taking a knock against Manchester United last weekend, and so he should replace Pablo Zabaleta. Meanwhile, Masuaku needs to be given the benefit of the doubt after Wednesday, with his fine early-season form meaning he should keep out Aaron Cresswell on this occasion.

Diop can expect to continue at the heart of the defence despite his horrendous showing against Oxford. Fabian Balbuena was also awful, while Winston Reid isn’t fit enough yet. That means that Angelo Ogbonna should come in for Balbuena to partner the Frenchman.

Declan Rice and Mark Noble simply have to return to the starting line up on Saturday, with Carlos Sanchez and Robert Snodgrass missing out in central midfield.

As mentioned, Wilshere must keep his place in the number 10 role, while Andriy Yarmolenko and Felipe Anderson should come back in for Pablo Fornals and Nathan Holland.

And there’s no debate up front. Sebastien Haller absolutely must replace the hapless Albian Ajeti after he underperformed on Wednesday. 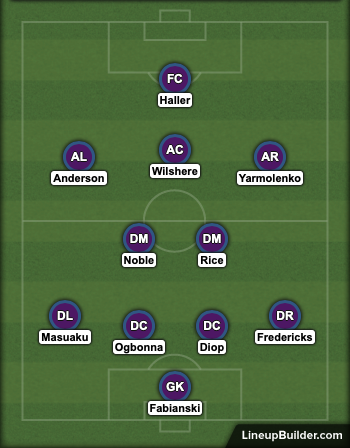