You cannot fault Robert Snodgrass’ effort. The West Ham winger will always put in 110% every single time he steps over that white line, and in that respect, he is a credit to both his club, and his country, Scotland. But there are times when you can fault the quality of his output. And that was definitely the case against Belgium on Monday evening. The Scots suffered a 4-0 defeat at the hands of the World Cup semi-finalists, and while it would be unfair to suggest that Snodgrass was especially poor given that the rest of his teammates hardly covered themselves in glory either, the Hammers man did draw a lot of criticism from international fans. The main concern you have to have for him is that it is not easy to see how he will play himself out of this slump either. With Andriy Yarmolneko back from injury, it is not immediately clear as to where he will feature in Manuel Pellegrini’s plans this season, if at all. Equally, when he has played this season, he has looked off the pace a little, averaging just 0.7 shots per game in the Premier League, as well as 0.7 key passes and 1.3 successful dribbles, as per Whoscored. He has carried that kind of form with him onto the international scene, and he will not be wanting to reminisce about the events of Monday too often after a pretty poor outing. 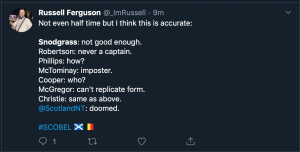