Rice: Lanzini is fire every game

Manuel Pellegrini’s side produced a tremendous performance as they eased to victory over Daniel Farke’s plucky Premier League newcomers.

Rice was over the moon with the result: “Brilliant performance & 3 points going into the break!,” he wrote on his personal Twitter account. “Got to say.. our front 3 [emojis] we keep building.

“He’s [fire emoji] every game!,” he then replied to a fan who had said ‘poor Lanzini’. 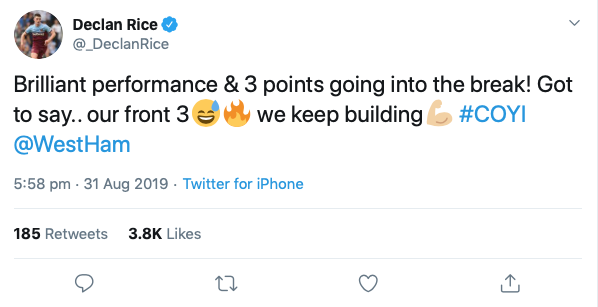 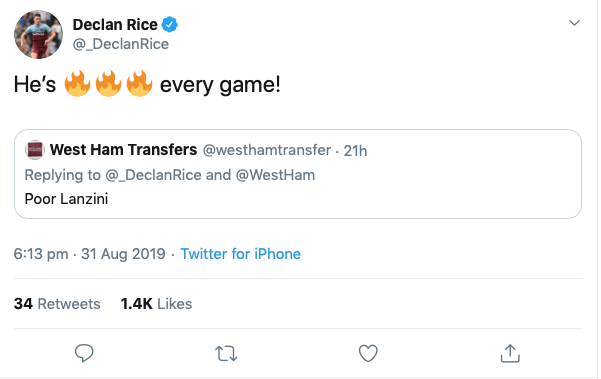 It’s clear from this Twitter exchange that by West Ham’s front three, Rice meant Andriy Yarmolenko, Felipe Anderson and Sebastien Haller. However, it’s more of a three in support of Haller up front, with Lanzini playing alongside the Ukrainian and the Brazilian in attacking midfield. It’s no secret that the Argentine international is a class act on and off the pitch, and he showed that once again on Saturday. It wasn’t his finest game, and the goals scored by Haller and Yarmolenko took some of the shine off him, but he was terrific nonetheless. It speaks to how strong this Hammers squad is at present that someone as naturally gifted as Lanzini can go under the radar at times. That’s incredibly encouraging for the West Ham supporters. Rice clearly appreciates the ability of his mercurial teammate, as do all the Irons fans who came out on Saturday to watch him at the London Stadium.