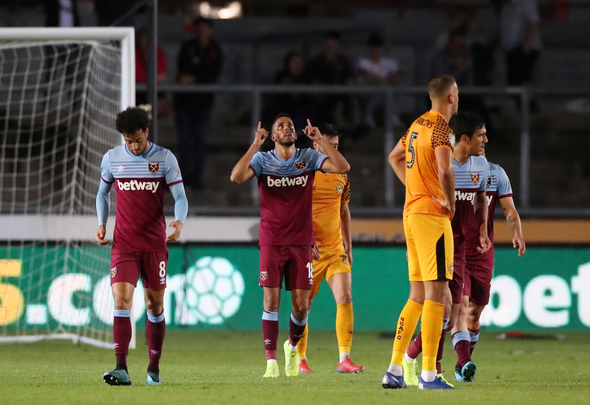 West Ham United battled hard to pick up a point against Aston Villa on Monday evening, with Arthur Masuaku’s second-half red card instantly putting them on the back foot.

The left-back was dismissed for a second yellow after a questionable decision to penalise him for a foul on Villa’s Ahmed Elmohamady.

Despite being a man down for the final quarter of the game, it finished 0-0, and Manuel Pellegrini could have been left wondering how his side didn’t steal all three points.

Summer signing, Pablo Fornals, was introduced towards the end of the game and failed to make much of an impact, wasting numerous chances at the end of counter-attacks.

Hargreaves spoke highly of a number of West Ham players after their resolute performance at Villa Park, claiming he would like to see more of the former Villareal man.

“He’s got a good goalkeeper in Fabianski, he’s got a good back four, two strong centre-backs played really well today, Diop, I think is really impressive,” he said on the Premier League’s official website.

“I thought Fornals looked very good when came on, I’d like to see more of him, but I thought the best player on the pitch was Sebastien Haller, every time I watch him, he plays really well, and he’s going to score some goals this season.”

His decision to label Fornals as very good seems strange, especially given the fact that the Spaniard potentially cost them the chance of winning the game with a number of misplaced passes in the final third.

The 23-year-old looked blunt in attack, and five of his 18 passes in the game were attempted long balls according to WhoScored, as he only completed one key pass, on a night where he could easily have assisted two goals.

Yet Hargreaves seems to suggest Fornals should be handed more minutes on the back of his latest display and that just seems wrong.

Hargreaves must think twice about calling for the Hammers to utilise Fornals more, with the Spaniard clearly needing to become much sharper before staking his claim for more minutes, as Manuel Pellegrini can’t afford to have a player waste possession.