After Sebastien Haller hit the ground running at West Ham United, there must be no better feeling than seeing a summer signing excel in the opening month at his new club.

Joining from Frankfurt in a club-record deal for the Hammers, Haller has scored three goals in as many games at the beginning of the Premier League campaign, as he continues to impress for Manuel Pellegrini.

All three of his strikes have come in winning efforts as West Ham overcame both Watford and Norwich City to see them go through the international break in the top half of the table.

The Frenchman arrived at the London Stadium after months of failed negotiations with then-Celta Vigo striker Maxi Gomez, who eventually decided to join Valencia.

After turning down a move to East London, Gomez explained, as relayed by Claret and Hugh, that the reason he decided to remain in Spain was based on the “important” competitions Valencia were involved in.

The 22-year-old has struggled at the La Liga club so far, with West Ham currently having the last laugh as their new forward can’t stop finding the back of the net.

Comparing the two striking options via WhoScored, it is clear to see that Haller has not had the same struggles as Gomez when joining a new club. 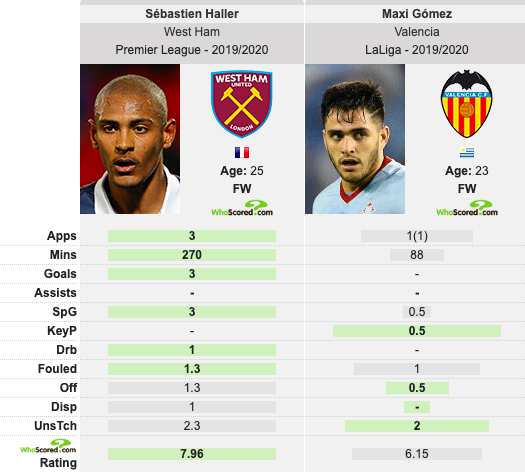 Haller has admittedly played many more minutes than the younger forward but has looked much more menacing for opposing defences to deal with.

The 25-year-old has averaged three shots per game so far, which is six times the amount of Gomez – who has only averaged a poor 0.5 in front of goal.

With Gomez failing to score in the league this season, West Ham have certainly had the last laugh with the arrival of Haller, who has made the Valencia man a distant memory in London.