West Ham owner David Gold has taken to Twitter to wish manager Manuel Pellegrini a happy birthday ahead of the Hammer’s Premier League clash against Aston Villa on Monday.

The Hammers host the Villans in a match that could see them climb up to third with a win, and Gold is hoping that Pellegrini can give himself the best present of all – three points.

Writing on his personal account, he said: “Happy Birthday to our manager Manuel Pellegrini!

“Have a great day and bring home three points.” 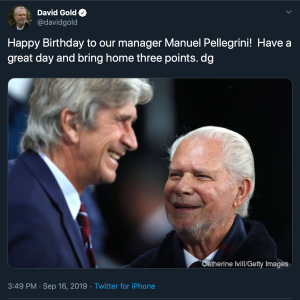 West Ham fans would love nothing more than three points to give their manager the birthday party that he deserves, and climbing up to third in the Premier League table would be a pretty nice gift too. The fact that the Hammers endured the worst possible start to their campaign with a battering from champions Manchester City, but could still move level on points with Pep Guardiola’s men with a victory tonight, shows just far they have come under Pellegrini. This is the same club that had to wait an eternity for their first three points of last season, but this time around they have bounced back well and look to be a much brighter side after a summer of good business. Perhaps the most important signing of all will prove to be Sebastien Haller, who already has three goals in three Premier League appearances, as well as winning an impressive 5.7 aerials duels per game, as per Whoscored. With a proper, reliable hitman leading the line, the Hammers look transformed, and the sky is truly the limit this year.