West Ham United co chairman David Gold has declared his Hammers Man of the Match verdict for Saturday’s 2-2 stalemate with Bournemouth ‘a draw’.

Manuel Pellegrini’s side battled back to ensure they came away from the Vitality Stadium with a share of the points, and Gold was very impressed with two men in particular.

“Great away performance today coming back from 3-1 down to draw 2-2 man of the match for me was also a draw between Declan Rice and Andriy Yarmolenko,” he wrote on his personal Twitter account.

“Away fans superb as always. dg.” 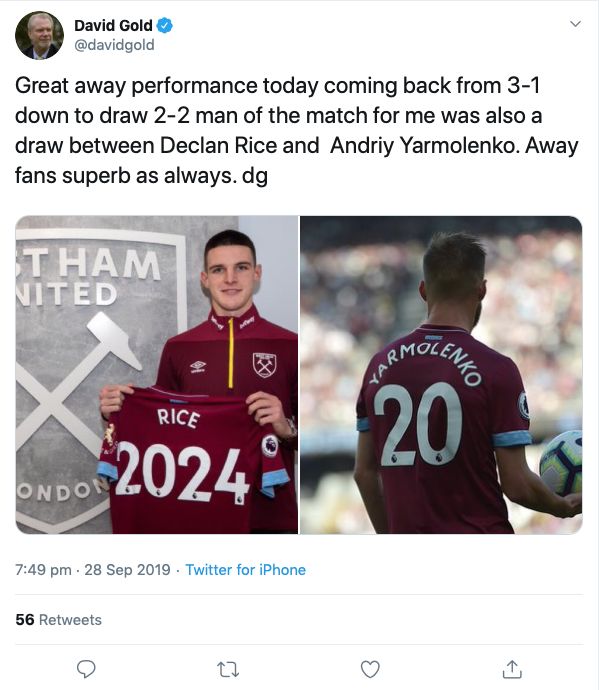 There’s no doubt that these were the two men who were most instrumental in West Ham securing a point on Saturday. Rice was a terror all game long, never giving the Bournemouth midfielders a moment’s rest. Yarmolenko, meanwhile, made it three goals in his last four Premier League games. The way the Ukrainian has bounced back from a debilitating injury that kept him out of the majority of his debut season with the Hammers is absolutely incredible. It only takes a cursory look at the statistics to see how heavily involved these two men were in Saturday’s outcome. As per WhoScored.com, Yarmolenko had two shots at the Vitality, one of them on target. Crucially, of course, that was his goal. However, he also produced two key passes and had a pass success rate of 90.7%. Rice managed to beat that tally though, recording a 92.9% pass success rate, second only to Pablo Fornals among the Irons. He also made six interceptions, three tackles and blocked a shot. He was absolutely everywhere on the south coast. Indeed, both men were tremendous.