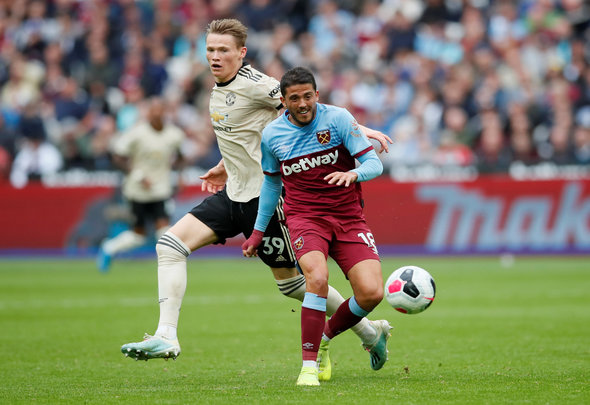 It’s too early to label West Ham United summer signing Pablo Fornals a bust, a waste of money or anything like that.

However, there’s no doubt that the Spanish international hasn’t made as smooth a transition to life in English football as Hammers manager Manuel Pellegrini would’ve hoped for.

The 23-year-old was handed a big audition against Manchester United on Sunday, with playmaker Manuel Lanzini ruled out through injury, but he very much fluffed his lines at the London Stadium.

Although the east London outfit eased to a terrific 2-0 victory in front of their home fans, Fornals had little to do with it. With that said, Lanzini, on a reported £70,000-per-week at the club [Source: Spotrac], can rest easy with his first team spot surely waiting for him once he gets back to full fitness.

Fornals gave possession away a number of times in the opening stages of the game, but faded once forced to play out wide on the left, and had little to no impact on the contest.

Indeed, as per WhoScored.com, he gave the ball away three times on Sunday, while he was dispossessed once. The Spaniard made one key pass and one tackle, while his pass success rate of 85% was pretty decent.

However, it’s difficult to recall a positive moment that the playmaker produced on Sunday. When you’re brought in for big money you’re expected to make an impact in games, and Fornals simply didn’t do that against the Red Devils.

His WhoScored rating of 6.45 for the match tells you all you need to know. He didn’t do horribly, but he failed to exert any influence. He was there, but he wasn’t there.

With that said, Lanzini doesn’t have much to worry about on this evidence. Fornals had a big chance to show what he could do, but in that he very much failed.