West Ham are nowhere near squaring off the edges of their pitch at the London Stadium, according to reliable source ExWHUemployee.

The Hammers have had to make do with stands that fit the shape of a running track since moving into the former Olympic stadium, and Ex has claimed that won’t be changing anytime soon.

Replying to a tweet asking when the work would be carried out, he said: “I don’t think it’s anywhere near happening”. 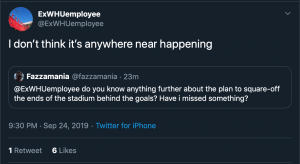 This isn’t exactly ideal for West Ham supporters. Ever since moving into the London Stadium, there has been a constant feeling that it has been a case of a round peg in a square hole, almost literally. The stadium, as impressive as it is, doesn’t necessarily feel like an arena for football, and it has taken an awful lot of work and patience for the Hammers to feel at home in their new abode. They are getting there, of course, but if they could find a way of squaring things off and bringing the stands closer to the action, it can only be a positive thing. By the sound of it though, supporters might have to be patient for that to happen. Given how well their side has started the season on the pitch though, you can bet that construction work will be fairly low down the list of priorities right now.