West Ham United centre back Issa Diop has come under fire recently for not starting this season in as emphatic fashion as he did last time out.

The Frenchman was tremendous for much of the last campaign, but his relatively slow start this time round saw Sky Sports pundit Darren Bent single him out for criticism recently.

He told Football Insider that the 22-year-old has been ‘ropey’ this season, claiming that he is the main reason for the Hammers’ defence being behind their superior attacking talent.

The 6ft 3in Brazilian [Source: Transfermarkt] is off the mark for the Villans after netting in their sole Premier League victory against Everton and will doubtlessly provide a stern physical test for the visiting Frenchman.

There’s no doubt, to be fair, that when you look at the statistics Diop is having a worse campaign than he enjoyed in his debut season last time out.

As per WhoScored.com, he is currently down in all but two major defensive statistical categories. His tackles per game rate is down from 2.1 to 1.5, clearances from 4.7 to 2.5, while he’s averaging a foul a fixture as opposed to 0.5 last term.

Clearly there is evidence to support what Bent says, but all Diop can do is use his words as motivation. And, as mentioned earlier, if he goes out and deals handily with Wesley then he will have produced the perfect response to the former England international. 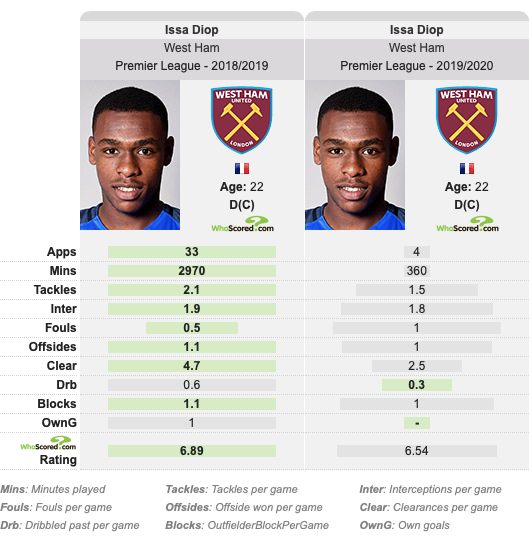