West Ham United forward Michail Antonio has delivered a message on Instagram after undergoing surgery on a hamstring injury.

The 29-year-old was forced off the field in the Hammers’ recent 2-0 victory over Newport County in the Carabao Cup second round.

Antonio was reported by the Evening Standard to have undergone a successful operation on the injury in the past week and will be out for a number of months in his rehabilitation.

The Hammers’ forward posted a message on his personal Instagram account on Monday, simply sharing how he is fully focused on returning to full fitness after the setback.

“Focused on that recovery, let’s go,” he wrote. 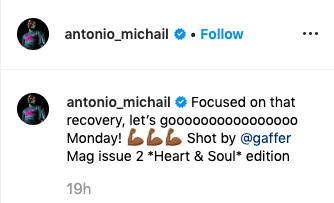 After suffering setbacks in three consecutive seasons now, Antonio will know what it takes to come back as strong as possible for the remainder of the campaign. Both of those injuries were also hamstring problems, meaning that surgery should eventually help him recover fully from this latest hinderance. His last couple of hamstring injuries set him back a combined total of 256 days and led to him missing 15 games in the process according to Transfermarkt. Manuel Pellegrini will be delighted to see a determination to return from his forward, who will be a real loss to the Hammers’ push for European football this season. Starting the majority of games on the bench at the beginning of the campaign, Antonio has come and made a difference, having won an average of 3.6 aerial duels per 90 minutes, as well as attempting the same amount of shots on goal [WhoScored]. To miss such an experienced option will be a big loss to West Ham, who will be counting down the days till his return.