West Ham manager Manuel Pellegrini is surely sweating over the possibility of Jamie Redknapp being right with his Premier League prediction for the Hammers as it could easily see his stay at the London Stadium end.

The pundit predicted the Hammers to finish 11th in the coming season, which is slightly worse than their 10-placed finish in the 2018/19 campaign.

Given that Redknapp thinks West Ham will fail to make progress on their latest campaign, then surely that spells trouble for Pellegrini as it could easily see him depart sooner rather than later.

This is especially the case when you consider Redknapp implies he feared Pellegrini might be sacked after just four games last season, which shows how impatient he believes Hammers chiefs David Sullivan and David Gold are, but also as the pundit points out that on paper the club have backed their manager in the transfer market.

“I feared for Pellegrini at the start of last season when they lost four in a row,” wrote Redknapp in his club-by-club pullout guide for the Daily Mail (page 28, Saturday, August 3rd).

“Declan Rice was a revelation in midfield. Issa Diop stood firm at the back, prompting interest from Manchester United.

“Pellegrini has overseen their summer transfers and has been back by his board in the market.” 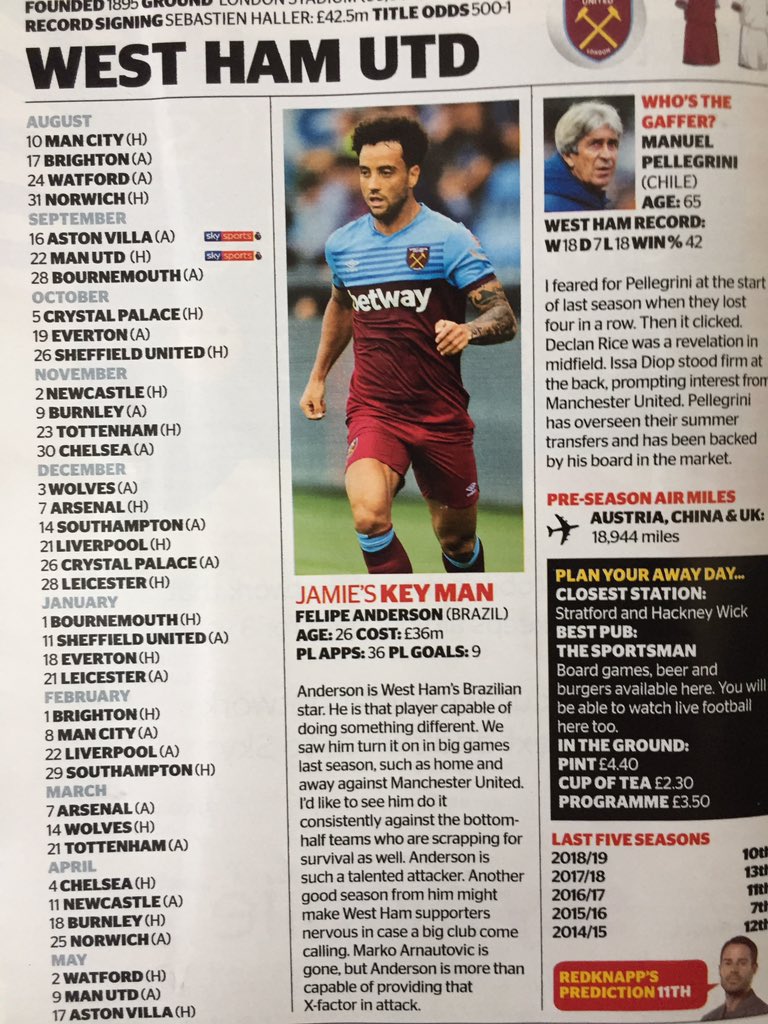 The Hammers have broken their transfer record this summer by signing Sebastien Haller for £45million, as per the BBC, and did invest heavily in Pablo Fornals by paying Villareal £24million for them.

However, while these two players are talented, hence why they cost a lot, both are new to the Premier League and will probably need time to settle, which means they may not hit the ground running.

Yet while Redknapp believes the Hammers board have backed Pellegrini, it is worth noting he has seen Pedro Obiang, Marko Arnautovic, Andy Carroll, Lucas Perez, Marcus Browne and Reece Oxford depart this summer, which has resulted in the Hammers not having a lot of depth in certain positions.

One injury crisis for the Hammers could, therefore, cause havoc as it stands, and you feel even though it’s not particularly his fault, Pellegrini will be the one blamed if the results don’t keep coming in and the London club end up finishing lower than 10th.

Given that Redknapp raves about the Hammers, particularly Felipe Anderson, and thinks the club will finish 11th based on everyone currently being fit, Pellegrini will surely be sweating over his West Ham future if the pundit is spot on.