Paul Konchesky sent a supportive message to defender Reece Oxford after the 20-year-old addressed his exit from West Ham.

The Hammers confirmed, via their official website, on Friday that Oxford had ended his eight-year stay in east London by joining Bundesliga side Augsburg on a permanent basis for an undisclosed fee.

The 20-year-old addressed his spell at the Hammers coming to an end by posting a long heartfelt message on his personal Instagram in order to thank everyone who was part of his journey.

“The time has come for me to move on – I am delighted to be back at @fcaugsburg1907 on a long term deal and have enjoyed the warm welcome I have received,” wrote Oxford.

“I would like to take this time to thank the players and staff at @westham for contributing to my development this far, I have learned a lot during the eight years I was there.

“Another thank you goes to the westham fans who have supported me along this journey. I am excited to see what this new journey brings!”

Oxford addressing his exit saw former Hammer, Konchesky, send him a seven-word message in order to wish him all the best in his future. 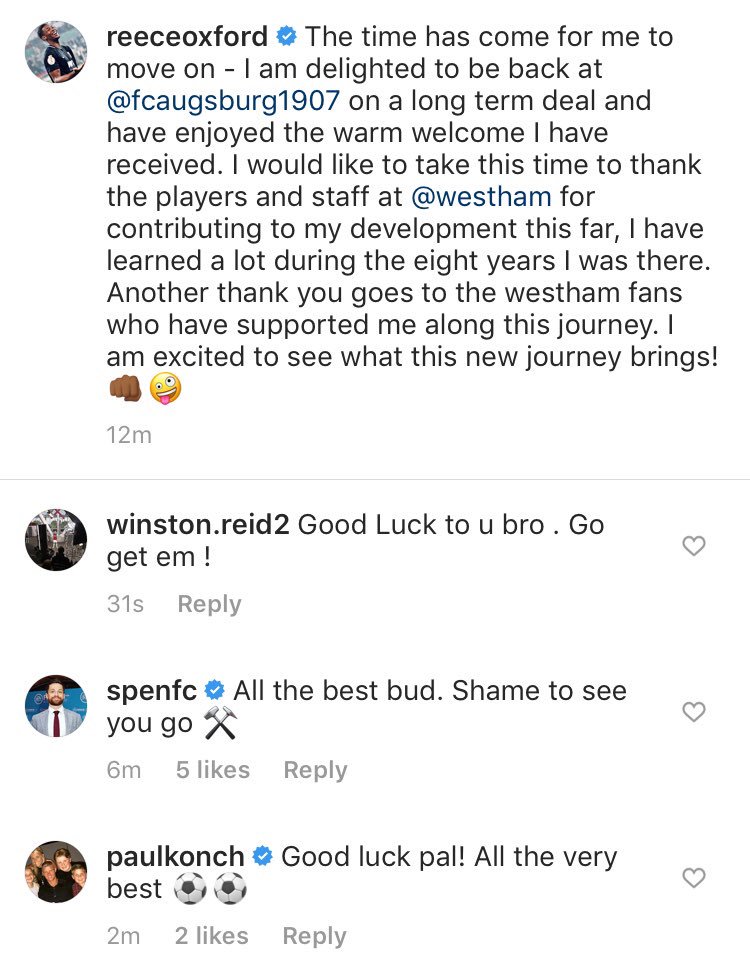 It’s hard to believe Oxford has actually left the London Stadium for good as, despite doubts about his long-term future in recent seasons, he has always been loaned out rather than sold. While it always seemed unlikely, it was hard to not hope that the Hammers would one day see the best of him again. After all, when Oxford made his debut for the Hammers at the age of 16-years-old in the Europa League in 2015, with his Premier League debut coming shortly after, he appeared to have the world at his feet. However, for whatever reason Oxford never truly fulfilled his potential at the club. The 20-year-old ended up making only 17 appearances for the first-team and ahead of his exit on Friday, he had four separate loan spells away at three different clubs. Hopefully, Oxford is able to settle in at Augsburg and really kick on with his career as it would be a shame if the dizzy heights that West Ham fans likely dreamed for him were never reached. The 20-year-old when on loan with Augsburg for the second half of the 2018/19 campaign,  made eight league appearances. In those eight outings, Oxford won 2 aerial duels per game, had a pass completion rate of 81.2% and averaged a rating of 6.16, as per WhoScored, so will no doubt be looking to build on that sooner rather than later.