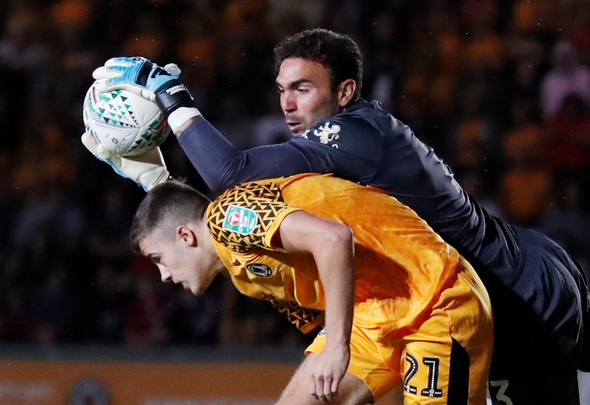 Andy Jacobs heaped praise on West Ham goalkeeper Roberto after watching him make his debut against Newport County in the League Cup on Tuesday.

The talkSPORT host was asked what he made of the Hammers’ 2-0 win over Newport and claimed that the player who did impress him was none other than Roberto.

Jacobs added that he hadn’t heard of Roberto previously but described the shot-stopper as being very impressive in his latest outing.

“I’ll tell you who did impress me, goalkeeper, Roberto, hadn’t heard of him, Spanish, was playing his debut but he was very impressive,” said Jacobs on talkSPORT (13:58, Wednesday, August 28th).

West Ham signing Roberto from Spanish club Espanyol earlier in the summer must have been missed by Jacobs and it’s easy to see why. The Hammers wrapped up a deal for the 33-year-old very early in the summer window to make him their first signing, and ahead of him joining there wasn’t much speculation regarding his move to the Hammers. However, it seems Jacobs already understands why the Hammers opted to sign Roberto to be their No.2 as he seemed blown away by the player’s display, despite it not being an overly busy night between the sticks on Tuesday for him as only four of Newport’s shots hit the target (Source: BBC), the 33-year-old did enough to stand out for the right reasons. The experienced shot-stopper averaged a rating of 7.97 on WhoScored and his distribution of the ball wasn’t too shabby, considering he averaged a pass completion rate of 7.97. While Roberto’s chances of leaping above Lukasz Fabianski in the Hammers’ pecking order to be the club’s No.1 are slim, after all the Polish keeper won Hammer of the Year last season, it is good to know that Manuel Pellegrini has a capable keeper to call upon in cup competitions.