Cascarino has some advice for Wilshere

Tony Cascarino suggested that West Ham midfielder Jack Wilshere faces an uphill battle becoming a guaranteed starter in Manuel Pellegrini’s side due to the presence of Declan Rice and Mark Noble.

The pundit explained that he thought the 27-year-old was going to have to fight his way back into the team, before suggesting that his promising display against Newport County in midweek didn’t really boost his first-team chances.

Cascarino then made it even more clear that Wilshere faces a challenge becoming a starter at the London Stadium as not only did he suggest the 27-year-old may be off the pace a little after so many injuries, he made it clear he had to seize opportunities when they come his way.

“Jack is probably going to have to fight his way back in the team as I imagine Declan Rice and Mark Noble will be their midfield,” said Cascarino on talkSPORT (6:27am, Saturday, August 31st).

“That will be the partnership, it has a lot of experience there in Noble then you have the emerging player that Declan Rice has become, Jack has to fight for that spot.

“Playing well and scoring a goal against Newport is unfortunately not what the Premier League is about, you’ve got to show more.

“I said last week I feel sorry for him as he’s coming back from so many injuries, so you feel he’ll be a little off the pace, but if he gets an opportunity he is going to have to take it.”

While Wilshere is a big-name player, he’s played 176 times in the Premier League and has been capped by England 34 times, there’s no denying Cascarino’s suggestion about him is spot on.

After all Noble and Rice are more than capable of keeping the 27-year-old out of the team. 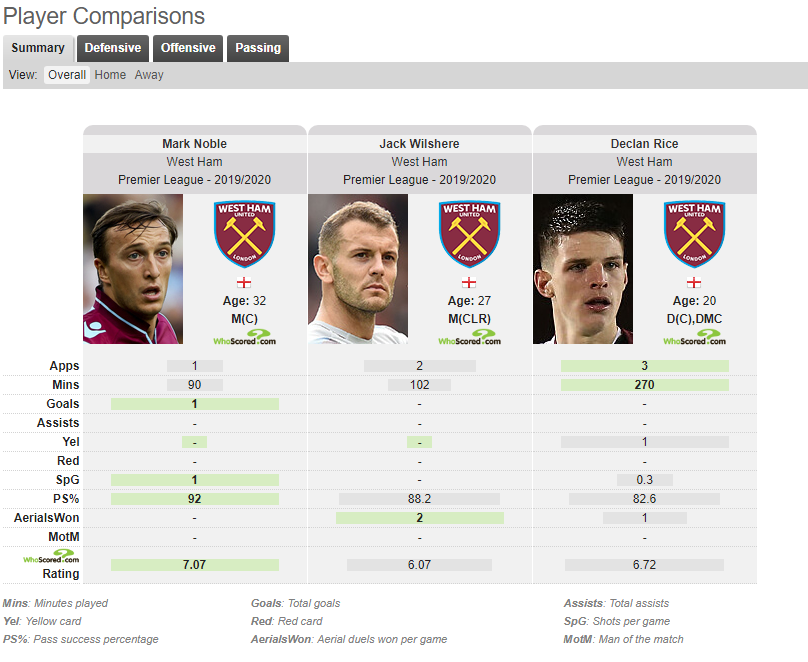 If you compare how the trio’s Premier League campaigns have gone so far on WhoScored, barring in mind Noble has only featured once, Wilshere still looks like the worst option of the three currently.

Wilshere has averaged the lowest rating, hasn’t managed a shot on goal, his pass completion rate is only just the second-highest, and his only redeeming feature seems to be the fact he has won more aerial duels on average than the other two.

Also, it’s worth noting that Noble and Rice formed a formidable partnership in midfield last season as they both feature over 30 times in the Premier League, more often than not playing next to each other, so Wilshere has to be extra good in order for that duo to be separated.

So while the media spotlight will continue to make Wilshere a big-name, it doesn’t mean first-team minutes are guaranteed at the London Stadium unless he ups his game.