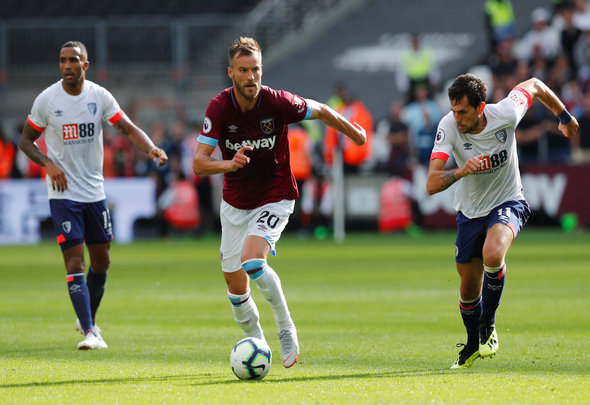 Hiding behind the notable omission of Pablo Fornals from the West Ham United starting 11 on Saturday, was the absence of Andriy Yarmolenko from the entire matchday squad.

The Ukranian returned to the Hammers’ set up in pre-season after missing the majority of last season with an Achilles Tendon rupture, which forced him to sit out of 32 matches last season.

Yarmolenko made a good start to his West Ham career in the first two months of last seasons Premier League but has since struggled to make an impact after returning in the club’s trip to China.

That continued on Saturday, as the Ukraine international missed out – with Football.London reporting that there was no real reason behind his absence as Manuel Pellegrini simply decided to leave him out of the squad.

Based on that report, it would seem that Yarmolenko has dropped down the pecking order at the Hammers, and new signings such as Pablo Fornals have made it even harder for him to make an impact.

The 29-year-old well and truly hit the ground running at the London Stadium, scoring a double against Everton and also scoring in the win over Manchester United, but the likes of Fornals and Robert Snodgrass featured on the bench instead.

With Pellegrini’s decision being reported as tactical, the writing could be on the wall for Yarmolenko as he has obviously failed to make much of an impact on the Hammers since his return and now faces a battle to feature.

Yarmolenko only averaged a single shot on goal per game last season as well as 0.6 key passes, and completing a poor 0.2 dribbles per game according to WhoScored – three areas that he must improve on drastically before even being considered for selection once more.

Big injuries are never easy to recover from, but if Yarmolenko doesn’t improve quickly, he could find himself even further down the pecking order under Pellegrini throughout this campaign.