This summer has largely been a positive one on the recruitment front for West Ham United, but there is one glaring hole in the team that still needs to be filled.

Yes, you guessed it, defensive midfield. The Hammers are incredibly vulnerable in the middle of the park right now, with a potential injury to star man Declan Rice spelling disaster for Manuel Pellegrini’s side. Simply put, if the England international goes down, West Ham are screwed.

That’s because they have nearly no depth at the position, which is why it’s so concerning that the club have now seemingly ended their pursuit of Nantes defensive midfielder Valentin Rongier.

France Football reported on Monday that the Irons have called a halt to their pursuit of the French side’s captain, deeming him too expensive.

Firstly, the drivel coming out of the London Stadium that the club have virtually no money left to spend seems very hard to believe when you look at the team’s net spend this summer and the amount of players they’ve been able to offload.

So this seems like more a case of the owners not wanting to splash any more cash, resulting in the end of their hunt for a player who is exactly what Pellegrini’s team needs. Make no mistake about it, calling off the Rongier chase is surely a big blunder.

We know that Rice is the primary defensive midfielder in east London, but in theory he is backed up only by an ageing Carlos Sanchez and an unproven Josh Cullen.

When you take Rice out of the equation, you’d be forced to play Sanchez, Cullen, or shift one of Jack Wilshere or Mark Noble into an uncomfortable holding midfield role.

However, a swoop for Rongier would alleviate those problems. As per WhoScored.com, the Frenchman dominated Sanchez, Wilshere and Noble in a host of defensive statistical categories last season, including winning out in average tackles, interceptions and blocks per game.

This is a much-needed signing for the Hammers, but one they are seemingly willing to forgo. That decision could end up having disastrous consequences this season. 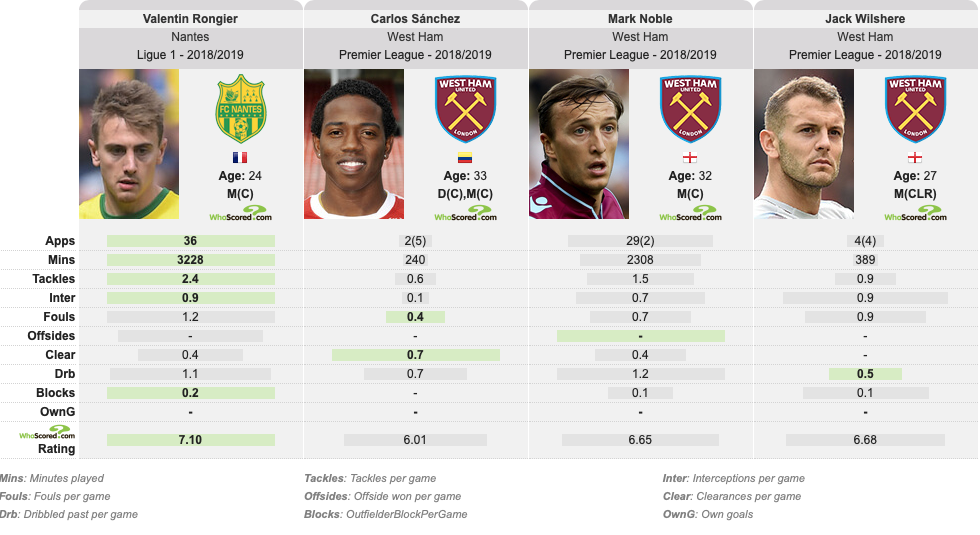