West Ham trio must step up their game

It’s fair to say that West Ham have not had the best start to the new Premier League season.

Despite a summer of eye-catching business and big money deals, the Hammers have yet to win a game.

Admittedly, we are just a fortnight in, and the opening weekend’s 5-0 defeat to Manchester City always felt like a bit of a free hit, but failing to pick up all three points against Brighton will have been an annoyingly bitter pill for Manuel Pellegrini’s side to swallow.

The Irons go again on Saturday afternoon though, and a lacklustre Watford will be regarded as a very beatable opposition.

If West Ham are to get their first win on the board, however, they will need to show a lot more than they have in their previous two outings.

And this is a point that Charlie Nicholas has been quick to point out.

Speaking to Sky Sports News, he said: “Felipe Anderson, Manuel Lanzini and Jack Wilshere have to do more. They need to get a few results to get going.”

To be fair to Anderson, he did miss the draw against Brighton with a dead leg, and Lanzini was on hand to assist Javier Hernandez’s opener, but all things considered, it’s hard to disagree with the pundit.

So far this season between them they have managed just one shot on goal, two key passes, and four successful dribbles, as per Whoscored, and most worryingly of all, they have all come from Lanzini. 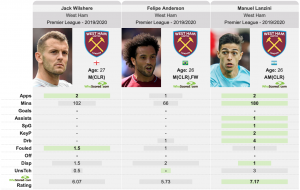 Anderson and Wilshere are yet to contribute anything so far this campaign, and while the season is still young, the pair need to step it up pronto.

Even Lanzini can go up another level or two, and the sooner he does, the better for Pellegrini and his boys.

Saturday’s clash with the Hornets will be the perfect opportunity to get things rolling.