West Ham United have started discussions to sign another forward this week, according to ExWHUemployee.

The reliable club source revealed that any move for the forward is unlikely with the unnamed striker’s current club not keen on sanctioning an exit.

ExWHUemployee reported on his personal Twitter account that West Ham are wanting to seal a loan move with an option to buy – something unlikely to happen at this stage. 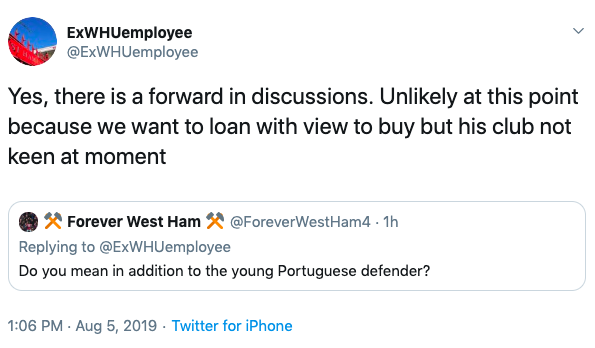 Claret and Hugh have reported that Manuel Pellegrini only has £5million to spend, with a defender the most likely arrival at the London Stadium before Thursday’s transfer deadline.

Club-record signing Sebastien Haller is currently joined by Javier Hernandez and Michael Antonio as the Hammers’ three main options in the final third.

If pre-season as proved anything at West Ham, it’s that their defence isn’t as strong as it was thought at the end of last season. The only positive surrounding that fragility is the emergence of their new look frontline, which looked like they could be set to bail out Pellegrini’s men in the next Premier League campaign. The likes of Haller have fitted in perfectly with Pablo Fornals, Felipe Anderson, and Manuel Lanzini combining as if they have lined up together for years. Pre-season was full of great team moves which led to goals, but they were overshadowed at times through poor defending – something which must be sorted before they look to add reinforcements in the final third. Blick reported on Monday to be in talks with Basel forward Albian Ajeti, and that could be the forward the Hammers are in discussions for, especially given the fact that the young Swiss international was involved in 32 goals in 43 appearances last season. Should West Ham strengthen their defence first, a move for a new forward would be a smart move by Pellegrini.