West Ham not in for Coutinho

West Ham are not in the running to sign Phillippe Coutinho from Barcelona, according to reliable source ExWHUemployee.

The Brazilian, who arrived in Spain for £142 million in January 2018, has been heavily linked with a move away from Barca this summer, with Sport suggesting that there is a loan offer on the table for the star, and that the Premier League is his most likely destination should he leave.

But when asked if there was any chance of the Hammers being the side to have made a bid for Coutinho, Ex said via his personal Twitter account: “No unfortunately” 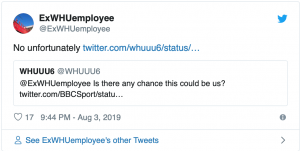 West Ham fans probably won’t be too surprised to hear that they’re not in for Phillipe Coutinho, but it’s nice to be sure on these things isn’t it? To be fair, even if they were, somehow, in the running for the Brazilian, you would maybe question the wisdom of a move for him. When you consider that the Hammers have now got Manuel Lanzini, Felipe Anderson, Jack Wilshere, and Pablo Fornals, the last thing they need is another attacking midfielder. The Hammers are probably only going to bring in one more signing at the most this summer, and you would fancy that Manuel Pellegrini will probably look for some defensive reinforcement. As boring as that may be in comparison to signing a South American maestro, it’s that kind of pragmatism that should hopefully be the basis for another steady season of progress under Manuel Pellegrini – even if it is without Coutinho.