West Ham United are still in talks with Basel over the signing of striker Albian Ajeti, according to ExWHUemployee.

The reliable club source revealed that the Hammers are still in negotiations over the 22-year-old and are hoping for movement in the potential deal before the transfer deadline.

ExWHUemployee reported the news on his personal Twitter account on Tuesday after suggesting there was still room for new signings to join before Thursday. 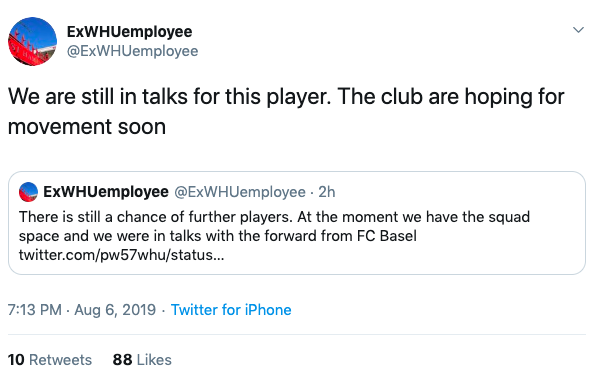 West Ham were reported by Football Insider to have submitted a £4.5million bid for the 22-year-old Switzerland international, with Championship sides Brentford and West Brom also being credited with holding an interest.

With the deadline quickly approaching for transfers on Thursday, West Ham seem more determined than ever to complete smaller deals to finalise Manuel Pellegrini’s side as they surely look for European qualification next season. With the Hammers hoping for movement in the negotiations soon, it appears as if they could be nearing close to completing a move for Ajeti, who would work out to be a smart piece of business by the East London club. The 22-year-old has fired his club into Champions League qualifiers this season and has finished as the top scorer in the Swiss league once before. Ajeti also has experience of winning silverware having won four separate competitions in his home nation. Ajeti has an eye for goal and can find the back of the net with ease – scoring 21 goals in all competitions last season for Basel. Should West Ham manage to complete a move for Ajeti in these next two days they could be on to a winner, with the 22-year-old surely determined to make an impact in the Premier League after spending his career in Switzerland.