It was written in the stars, wasn’t it? 15 years to the day since he made his West Ham debut, Mark Noble, Mr. West Ham who bleeds claret and blue, made his first start of the Premier League season against Watford on Saturday afternoon. After such a telling absence in the early stages of the season, the Hammers have been craving the return of their skipper, but not even the most optimistic Iron could have foreseen how immediate his impact on proceedings would be. Just three minutes into the match, with what was essentially his first touch of the campaign, the veteran midfielder stepped up to the penalty spot, as he has so often in his Premier League career, and lashed his beloved West Ham into the lead. His contribution goes far beyond spot kicks, of course, but it certainly doesn’t hurt that he seems to always convert them. That’s 26 penalties in his Premier League career now, and it almost feels like an inevitability whenever he is asked to dispatch one. His still and worse this in the centre of the park will still be what makes him most important for the Hammers this term, but as far as reintroductions go, they don’t come much better than this. 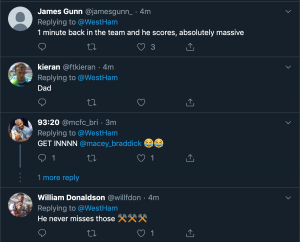