West Ham fans will tell you that they are cursed when it comes to injuries. The Hammers suffered all of last season with various knocks and niggles, and it feels as if it has been an age since they have been able to pick a starting 11 from a full strength side. Even on Saturday against Watford, the Irons emerged from their team coach without Jack Wilshere and last week’s goalscoring hero Javier Hernandez. And so, it is understandable that the Hammers were up in arms when. Manuel Lanzini went down midway through the second half against Watford. The Argentine has arguably been the Hammers’ most dangerous player in the opening stages of the new season, setting up Hernandez last week and winning the penalty that allowed Mark Noble to open the scoring in their 3-1 win over Watford this weekend. Lanzini made a block and went down un deer very innocuous circumstances. Thankfully, the 26-year-old was able to play on after a break in play, but the manner in which supporters reacted showed just how important he is to this side. Already this season, he has averaged four successful dribbles and two key passes per match, as per Whoscored, and you can’t help feeling that any good work the Irons do this season is likely to come from him or Felipe Anderson. Here’s hoping he can stay fit for the remainder of the campaign. 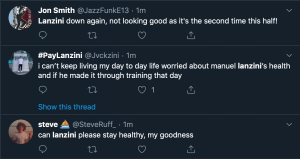