Sebastien Haller will have gone to bed last night dreaming of scoring in his first appearance at the London Stadium, and to be fair to the lad, he did manage to do just that side about 75 seconds. It’s just a shame that he put the ball in his own net, rather than the opposition’s. As far as own goals go, this was a stinker. A very pedestrian cross is whipped in from out wide, and rather than putting his laces through it and sending it somewhere up into the nosebleeds, the big Frenchman managed to slice it, almost illogically, past his own keeper. Haller will not want to see it again, but it was a goal that had the unfortunate quality of being both baffling and hilarious. It also didn’t help that everybody’s favourite useless striker Jordan Hugill, recently allowed to leave for QPR netted his first for his new club at almost precisely the same moment. No doubt Haller’s calamity will be played on a loop on Twitter for the next few days, but everything will surely be forgiven and forgotten if he can start firing them in at the other end. Thankfully, his 15 goals and average of 1.9 shots on goal per game last season, as per Whoscored, would suggest that he has what it takes to do just that. 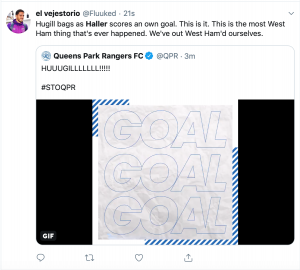 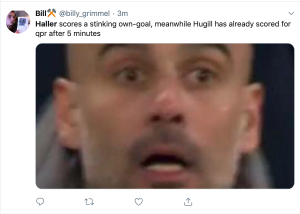