If there is one area that West Ham have chosen to strengthen in this transfer window, it would be their attack – with the signings of Pablo Fornals and Sebastien Haller surely turning their attack into a different animal.

One area of their squad that could have gone under-the-radar is their defence, especially after the drastic improvement last season, in which they conceded 13 fewer goals than the season before.

The honeymoon period seems to be well and truly over though at the London Stadium, with pre-season more than proving that Angelo Ogbonna and Winston Reid are way past their best for the Premier League.

With the two ageing central defenders not at their best, Manuel Pellegrini has been reported by Football Insider to have delivered a three-man shortlist to the West Ham board in order to strengthen his options.

Pellegrini’s reported wish to add to his defence surely highlights the slight fragilities that have started to appear in pre-season, with his defence not living up to the standards that they set themselves last season.

Both Diop and Balbuena set the standard high last season and comparing their stats via WhoScored, it is clear to see that anyone of the reported three targets who came in would be there for back up. 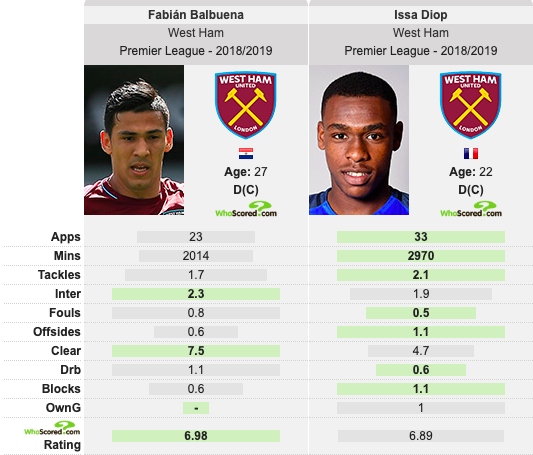 Both averaged an impressive amount of tackles and interceptions, with Balbuena averaging an incredible 7.5 clearances per game – with Pellegrini surely delighted with their defensive efforts since their partnership started.

Despite their impressive showings, the backup situation is clearly something that the Chilean is far from pleased with, and is surely set to strengthen with at least one signing.

It more than highlights their problems at the back, and the three-man shortlist makes it even clearer where West Ham stand right now.