Noble in awe of Haller effect 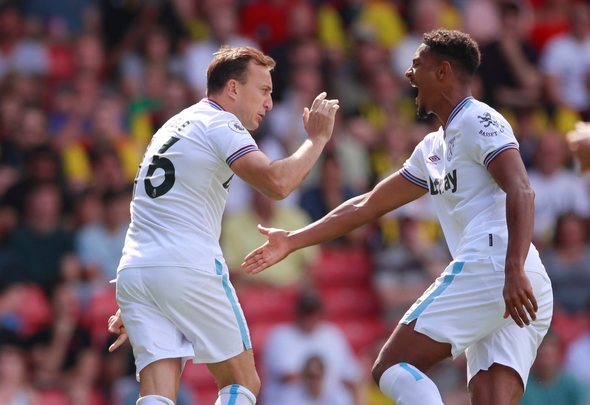 Mark Noble has praised the impact of West Ham United forward Sebastien Haller has had since arriving at the club.

The club-record signing joined the Hammers from Eintracht Frankfurt in the summer and scored his first two goals for the club in a 3-1 victory over Watford on Saturday.

The Frenchman’s second goal was the pick of the bunch, an overhead kick from a ball that had deflected into the air in-and-around the Watford goal.

Hammers’ captain, Noble, has sung the praises of the 25-year-old on the official club website, claiming he has had a great start to life at the London Stadium.

“When you come to a club and you’ve been bought for that sort of money, you want to get off to a good start,” he said.

“We played Manchester City at home, which was a tough game for us, then Brighton away which he missed, but he was back with two goals and let’s hope he can continue with that.”

Haller has definitely enjoyed a good start to his West Ham career, with the club surely crossing their fingers that he continues to do so in front of goal. The Frenchman missed the trip to Brighton on the second matchday and can be forgiven for not delivering against Manchester City, with his side struggling to deliver any decent service to him. Haller certainly came to life on Saturday though, and was into the swing of things instantly, charging through on goal within the first couple of minutes to set up Manuel Lanzini who won his side a penalty. Ultimately, the forward is judged on goals, and that he delivered in the second half with a couple – something Hammers’ fans will want to see consistently now. The 25-year-old has averaged 2.5 shots per game in his two outings according to WhoScored but has failed to register a single key pass, something that will certainly come if Saturday’s showing is anything to go by. His physicality and pace caused problems all afternoon and Manuel Pellegrini will be desperate to see more – with Noble already praising his impact.